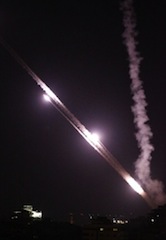 Palestinian missiles are fired from Gaza City toward Israel

The army later confirmed a missile strike by Israel on a military site near Damascus, without specifying further, according to a report on the state-run news agency SANA.

According to sources close to the Syrian government the missiles were aimed at a “research centre” in the town of Jamraya, just north of the capital, which had been also been the target of previous Israeli strikes.

A spokeswoman for the Israeli army declined to comment on the report.

The Syrian army’s air defence system had “dealt with these missiles and destroyed a number of them before reaching their targets,” one source told dpa.

Israeli planes usually use Lebanese airspace to fire missiles at targets around the capital Damascus.

Israel has carried out a number of strikes usually focused on areas in which the Lebanese Shiite movement Hezbollah, a major ally of Syrian president Bashar al-Assad, has a presence.

The Pro-Iran Hezbollah has been fighting alongside al-Assad’s forces since an anti-government uprising began in Syria in 2011.