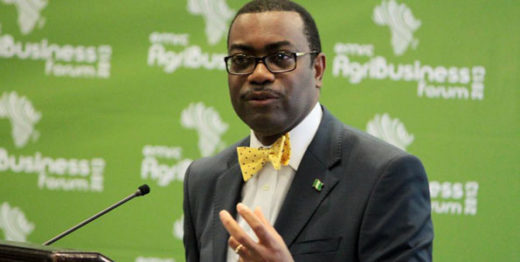 The President of African Development Bank (AfDB), Dr Akinwumi Adesina, said that the Bank, 2017, achieved its highest annual disbursement ever of 7.67 billion dollars on supports.

Adesina said this in a statement made available to the News Agency of Nigeria (NAN) on Thursday in Abuja.

He said that the Bank would continue to support African countries in ensuring stronger macroeconomic policies.

“The Bank achieved its highest annual disbursement ever in its history, at 7.67 billion dollars.

“Our investment in the energy sector in 2017 covered 31 operations in 23 countries and totaled 1.39 billion dollars, representing a 30 per cent increase over 2016.

” In 2017, the Bank maintained its AAA rating with stable outlook by all four global rating agencies.

He said that the Bank was working hard to be more efficient and become impact driven organisation; one that accelerated Africa’s development, holding itself to a higher standard of performance.

The president said that it was only when the Bank became performance driven that it could meet Africa’s expectations.

Adesina assured that the Bank intended to score a lot more development goals for Africa, adding that there was need for greater alignment, performance and accountability for results.

According to him, the Bank continues to grow its income solidly, reversing its declining income when he started two years ago.

“I am delighted that in 2017, the Bank helped leverage 6 billion dollars for the landmark Japan-Africa Energy Financing Facility.

“This will help accelerate efforts to light up and power Africa,” Adesina said.

He said that the Bank was doing a lot on “Light Up and Power Africa agenda”, adding that in 2017 it invested 1.39 billion dollars.

He added that the aim was to improve access to electricity to help generate an additional 1,400 MW of power and connect 3.8 million persons to electricity.

On renewable engergy, the president said that the Bank was leading, adding that when he assumed office, the share of renewable energy in the Bank total power portfolio was just 14 per cent.

He said that with access to more funding, “we hope to provide electricity to an unprecedented 29.3 million Africans between 2018-2020”.

The president said that the Bank was spearheading the development of the desert to power initiative to harness electricity from the sun all across the Sahel.

He said that ” our goal is to support the generation of 10,000 MW of power, connect 250 million persons to electricity, of which 75 million people will be through off-grid systems.

“Africa needs to promote green growth. We are extremely conscious of our climate and environmental responsibilities and leadership role.

Adesina said that the Bank would be tripling its climate finance to 40 per cent of its portfolio by 2020.

On agriculture, he said that the Bank in 2017, invested 1.16 billion dollars in the sector – the highest ever in the Bank’s history.

It also launched Technologies for African Agricultural Transformation (TAAT), a one-billion dollar initiative to take agriculture technologies to scale for millions of farmers.

Adesina said that with adequate resources, between 2018-2020, the Bank expected to provide 29.2 million Africans with access to electricity.

He added that the bank’s Integrate Africa High 5 would provide 50 million Africans with improved access to transport.

He added that High 5, on improving the quality of life would also provide 36.8 million persons with improved access to water and sanitation.

Adesina said that the support of all shareholders was crucial for the general capital increase of the Bank.

He said that the Bank would do more for Africa and “we are working extremely hard to revamp the Bank and put it in a much stronger position, with more highly capable staff and institutional capacity to deliver more, better and faster support.

” Our ability to deliver in the past and now is a good indication that you can depend on us to deliver more in the future.