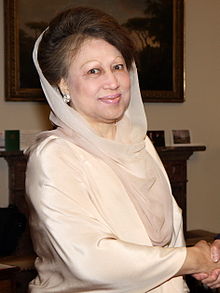 Zia, who is now chief of the opposition Bangladesh Nationalist Party (BNP), and five others had been charged after foreign donations intended for a charity went missing.

The BNP has dismissed the case as politically motivated.

Zia had faced the possibility of a life sentence.

Security was tight across Bangladesh in anticipation of the judgement by a special court in Dhaka with police checkpoints set up across the capital.

Television footage showed police detaining a number of demonstrators, some of whom pelted bricks at officers.

A motorbike was also set on fire in the city.