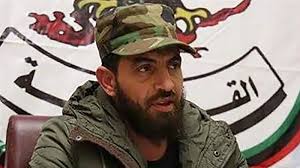 A Libyan commander wanted by the International Criminal Court (ICC) over a series of summary executions was released on Thursday, a day after handing himself in to military authorities in eastern Libya, a military source said.

Supporters of the commander, Mahmoud al-Werfalli, had demonstrated in the eastern city of Benghazi late on Wednesday against any legal action being taken against him, closing roads and burning tires.

Some held signs reading “We are all Maj. Mahmoud al-Werfalli”.

Werfalli is a commander in an elite unit attached to the Libyan National Army (LNA), the dominant force in eastern Libya.

It rejects the internationally recognised government in Tripoli and is aligned with a separate government based in the east.

The ICC issued an arrest warrant for Werfalli in August 2017, accusing him of a role in the summary killings of 33 people between June 2016 and July 2017, as the LNA neared the completion of its campaign to take control of Benghazi.

The ICC’s chief prosecutor reiterated her call for the LNA’s top commander Khalifa Haftar to hand over Werfalli after a video purportedly showed him shooting dead 10 blindfolded prisoners at the site of a car bombing in Benghazi in February.

A military source said Werfalli had returned to Benghazi overnight “after the completion of investigative procedures concerning the case of the International Criminal Court”.

By Thursday morning, the protests had subsided and roads in Benghazi had reopened.

LNA leader Haftar is a likely candidate in elections that the UN says it is hoping to hold by the end of the year in an effort to help unify Libya.