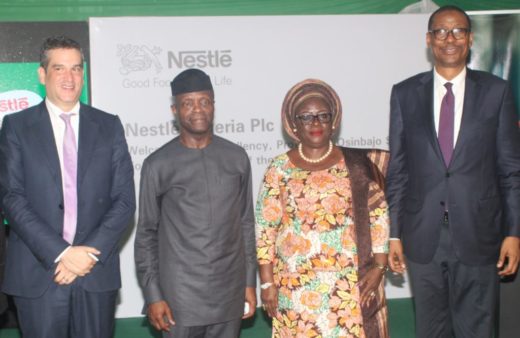 The Vice-President, Yemi Osinbajo, on Thursday urged multinational companies to domicile their factories in Nigeria as he inaugurated Nestlé Nigeria Plc’s N4.1 billion Milo-Ready-to-Drink (RTD) factory at Agbara in Ogun.

Osinbajo said that they should take a cue from Nestlé Plc’s expansion drive to domicile their factories in Nigeria as the country remained the preferred destination for investment in Africa.

“We are grateful to Nestlé for these significant investments, particularly for locating its factories in rural communities and sourcing its raw materials from local farmers, contributing to the sustainable development of Nigeria,’’ he said.

Osinbajo said that the Federal Government was committed to creating an enabling environment for businesses to thrive and actualising the objectives of its Economic and Recovery Growth Plan (ERGP) of the government.

The vice-president said that government would facilitate private sector growth and sustainable development through increased investment in infrastructure.

He noted that the plant which was equipped with the latest state-of-the-art technology, adopted high safety and environmental standards.

“This new plant is a reflection of the continued confidence the industry has in the robustness of our economy,’’ said Osinbajo.

The Managing Director of Nestle Nigeria, Mr Mauricio Alarcon, said the new plant was a reflection of how Nestlé creates Shared Value for all, by providing jobs and sourcing 80 per cent of inputs from local farmers and investing in rural communities’ development.

“The new Nestlé Milo RTD is complementing the existing range of offerings of our iconic Milo brand.

“It is conveniently packaged to offer the unique Milo taste and meet the nutrition needs of active children on the go. This is in line with the company’s commitments to enable healthier and happier lives,’’ he said.

Alarcon said that the company would continue to invest in people, innovation and enhancing quality of life and health for sustainable future.

He noted that Nestlé Milo had built a rich heritage in Nigeria as the food drink of champions, inspiring early participation in grassroots sports through various programmes, including the Nestle Milo Basketball Championships.

Alarcon said that Nestlé believed that the programmes was a platform for learning valuable life lessons, like respect, teamwork, perseverance and resilience for success, vital not only on the field but in life.

The Governor of Ogun, Ibikunle Amosun, said the factory’s inauguration was a testament to Nestlé’s belief in the economy and prevailing tranquility of the state.

Amosun, represented by the Deputy Governor, Yetunde Onanuga, urged companies in the state to collaborate with government in infrastructure development, educational improvement and compliance with tax payment.

The new plant is part of the company’s existing factory at Agbara which has successfully been operational for 37 years.

The new plant produces Nestlé Milo Ready-To-Drink (RTD) beverage in 180ml cartons and has a yearly production capacity above 8,000 tonnes.

Nestlé has been present in Nigeria since 1961 and has a staff strength of over 2,300 direct employees, three manufacturing sites and eight branch offices.

Launched in October 2017, Milo RTD is made from the natural goodness of milk, malt and cocoa.

Milo provides essential nutrients and is fortified with Nestlé’s unique blend of vitamins, ACTIV- GO (Vitamins B3, B2, B6, B12, vitamin C, and vitamin D) and minerals, including Calcium and Iron.

Nestlé is a strong pillar of growth in the Nigerian economy. It produces a range of high quality iconic brands including Maggi, Milo, Golden Morn, Nescafé and Nestlé Pure Life.