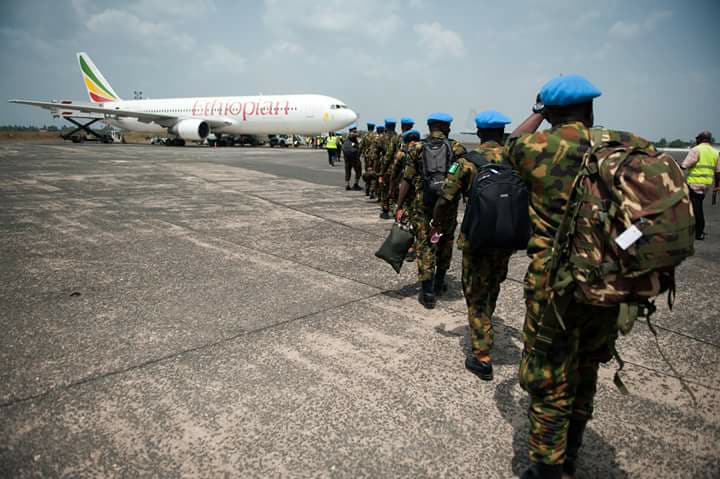 The last batch of 200 Nigerian peacekeepers deployed to Liberia under the UN Mission in Liberia (UNSMIL) have withdrawn after five years following the conclusion of their mission in the country.

The last military protection force in UNSMIL left Liberia on Thursday as part of the termination of the mission’s mandate, scheduled on March 30, the mission said.

UNMIL was established in September 2003 to monitor a ceasefire agreement in Liberia following the resignation of President Charles Taylor and the conclusion of the Second Liberian Civil War.

The Nigerian contingent has been deployed in Liberia since the mission was established in September 2003 to monitor a ceasefire agreement in Liberia, following the conclusion of the Second Liberian Civil War.

An official farewell ceremony was held on Monday in honour of the departing Police and Military personnel who have served with the Mission.

This symbolised the end of UNMIL’s military and police operations in Liberia, more than 14 years after UNSMIL was deployed in compliance with Security Council resolution 1509 (2003).

The Force Commander Maj.-Gen. Salihu Uba, head of UNSMIL’s Military component of men and women from various countries including: Nigeria, Pakistan and Ukraine.

Uba was Commander of the Training and Doctrine Command of the Nigerian Army (TRADOC) before his appointment as the Force Commander for UNSMIL by the former UN Secretary-General Ban Ki-moon on Jan. 9, 2015.

The Formed Police Unit composed of Nigerian and Chinese personnel and since 2003, 61 contingents from various countries had served in Liberia, UNSMIL said.

According to Uba, the mission’s uniform component military and police have taken greater stride towards strengthening peace and security, rule of law, governance among others in Liberia.

The Force Commander stated that it was not all roses particularly for the military which had the highest fatalities of 138 personnel while the police lost 21 persons.

“As we are closing, the memory of those 159 persons and others in the Mission will continue to live in our minds.

“We will continue to pay special tribute to them and those who contributed to peace and security in Liberia” the Major General said.

The Force Commander, on behalf of the Police Commissioner Simon Blatchly, expressed their profound appreciation to the uniformed component of UNSMIL.

“As individual units and contingents, you have done remarkably well to keep the flags high, we are proud of your endeavours as significant contribution to peace in Liberia.

“Today Liberia is a success story and classical example of a post conflict nation that has emerged stronger than ever before.

“The country is indeed a symbol of hope for other nations engulfed in conflicts and wars” Uba said.

The last military protection force in UNSMIL, left Liberia on Thursday as part of the termination of the mission’s mandate, scheduled on March 30, 2018.

The Special Representative of the UN Secretary-General, Farid Zarif, in his speech, stated that this event signified an important benchmark in the history of the UN in West Africa.

“While my colleagues in uniform are writing the last pages of the peacekeeping operations here, Liberians and their Leaders have started writing the first pages of a brand new chapter in their history.

“The fact that the current circumstances allow the departure of our last contingent indicates that Liberia has reached the point where they feel absolutely confident of their future.” Zarif said.

Liberian President George Weah commended UNSMIL for its longstanding support to peace and stability, saying: “The Liberian people will forever remain grateful to you for your bravery and service to our great nation.

“To UNMIL service, men and women that will be staying in Liberia, remember Liberia is your home.

“Thank you for your hard work and sacrifice you have made over the years to keep the peace and stability of our beloved mama Liberia. As you leave us now, we will forever remember you”.

The handover of flags at the event symbolised UNSMIL relinquishing authority over the military and police forces back to their home country as the Mission officially ends its mandate on March 30, 2018.