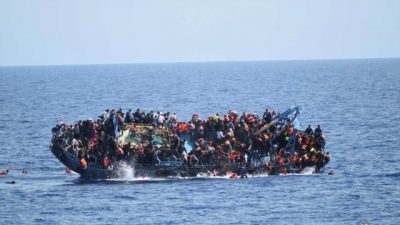 Twenty-two Ethiopian migrants are missing after being dumped in the sea off Yemen, the UN International Organisation for Migration (IOM) said on Friday.

IOM spokesman, Joel Millman, said the missing people were on one of four boats that brought 602 Ethiopian men and women to the coast of Yemen’s Shabwa governorate in the past 24 hours.

“We understand that passengers on the boat had been dropped into deep water and forced to swim to shore.

“No bodies have been recovered but 22 remain unaccounted for,” Millman told a regular UN briefing in Geneva.

He gave no further details of the incident.

“In spite of the difficult security problems in Yemen, it’s still a migrant transit point and we were still hearing about these reports pretty frequently,” he said.

Most are thought to be heading for richer parts of the Arabian Gulf rather than stopping in Yemen, which has been devastated by a civil war and an economic collapse that has pushed more than eight million people to the brink of famine.

Within Yemen, more than 85,000 people have been displaced since the start of December, mainly from Hodeidah and Taizz governorates, the UN refugee agency UNHCR said.

“Current military escalations on the west coast are leading to hundreds of people having to flee their homes on a daily basis,” UNHCR spokeswoman, Cecile Pouilly, said.

Most of displaced people were being hosted by relatives or friends, trapped inside homes or in caves as ground clashes, aerial bombardment and sniper fire rage around them, she said.