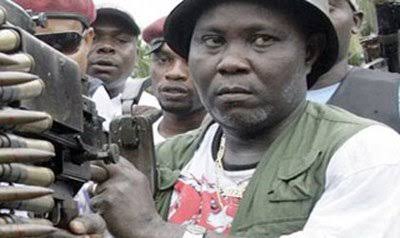 Ex-militant leader who is now the paramount ruler and the Amanyanabo of Okochiri clan in Okrika Local Government Area of Rivers State, King Ateke Tom, has instituted a N1 billion suit against eight chieftains of the All Progressives Congress (APC), in the state over alleged defamation.

Tom,  in suit No. PHC/345/2018, before a State High Court in Port Harcourt, further demanded an apology from the APC chieftains on national newspapers for denting his character.

Others defendants in the suit included Prince Tonye Princewill, Sekonte Davies, Emeka Beke, Secretary of the APC in the State and Dr. Lawrence Chuku.

The defendants were said to have, during a pro-SARS rally organized in Port Harcourt, by the party, in which Ateke’s picture was printed in a banner and allegedly described as a criminal made a king by the state government.

The suit read in part: “On the 11th Day of December, 2017, at Port Harcourt, Rivers State, all the defendants falsely and maliciously wrote and published or caused to be written and published of and concerning the claimant in the way of his office as a second class traditional ruler recognised by the Rivers State Government in the form of Written Banner wherein his picture was displayed in his traditional regalia beside that of the Executive Governor of Rivers State, His Excellency Chief Nyesom Wike, with the following inscriptions on it”.

However, Tom wantsd the court to compel the defendants to jointly and or severally pay him the sum of N1 billion for libel and defamation of his character.

He also wanted the court to make an order directing the defendants to render a written apology in a prominent and conspicuous medium retracting the said offensive banner publication and publication in three national dailies.

He further sought a perpetual injunction restraining the defendants, whether by themselves or their supporters from making any further defamatory publication concerning the claimant or his office in any form whatsoever, as well as an undertaking to that effect.