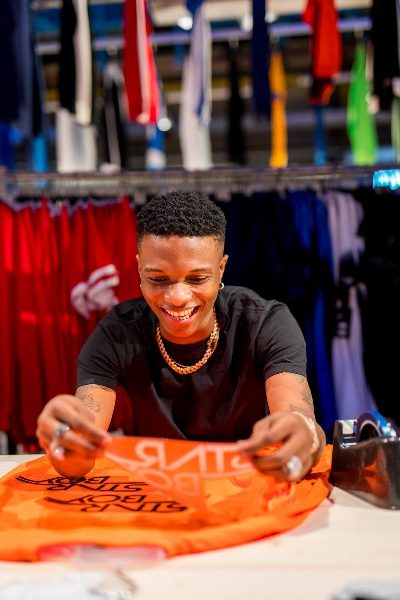 The Star Boy jersey, unveiled on Thursday by Nike, is part of Nike’s jersey shop campaign where stars can customise jerseys for their fans and friends.

The deal makes Wizkid FC the first African Musician to have an official jersey.

The move has been met with raving support from his fan base, most of whom view it as epic and legendary.

Meanwhile, a photo of fans in Kano wearing jerseys with ‘Wizkid FC’ inscribed on them for a football match is circulating social media.

@Abu tweeted: “Wizkid, are you signing any players to Wizkid FC? I make a hell of a defensive midfielder.”

@kUNGPablo wrote: “I should be the captain of Wizkid FC. I know practically every Wiz track. Wizkid is my personal legend to die for. I can’t wait to cop mine.”

@Hazardthepunisher said: “The way I am seeing this Wizkid FC, we can even beat Chelsea.”

@WizkidFCstriker said: “You don’t know the Starboy way. Wizkid FC is a lifestyle.”

@AfricanBadgirl wrote: “We can’t wait for wear it, take pictures with it and show to the world we are proudly Wizkid FC”

@Kemi: “I will get the Wizkid FC jersey for the culture. Imagine a concert and like half the crowd has it on. A whole vibe.”

@Isima Odeh tweeted. “I will definitely support Wizkid FC football club if ever one existed.”

Wizkid Fan Club (FC), coined by the singer himself in 2016, began to trend on social media after his collaboration with American rapper Drake on the Grammy nominated song ‘One Dance’.