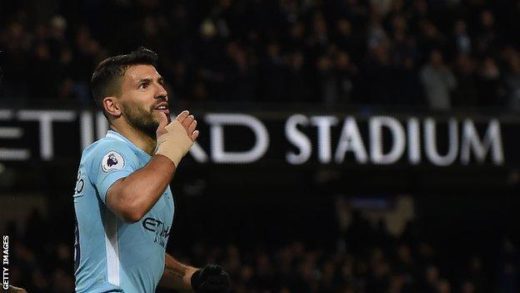 BBC reports that the Argentina striker took his tally to 13 in 10 games in 2018 with another display of deadly finishing, aided by a brilliant performance by Kevin de Bruyne, who set up his side’s first three goals.

Leicester winger Riyad Mahrez, who almost joined Manchester City at the end of January, received an ovation from both sets of fans as he returned from his self-imposed exile to make an appearance as a second-half substitute.

Whether Mahrez’s move to Etihad Stadium is resurrected in the summer remains to be seen, but this display from Pep Guardiola’s side showed that they can cope pretty well without him – especially with De Bruyne and Aguero in this form.

De Bruyne picked out Raheem Sterling at the back post to put the home side ahead in the third minute, with Sterling converting from almost an identical position to where he had missed against Burnley last weekend.

Leicester, playing with five at the back and using Jamie Vardy’s pace on the break, did not roll over and levelled when Nicolas Otamendi’s mistake let the England striker in to score.

But Manchester City resumed control with two goals in the space of five minutes at the start of the second half.

Another brilliant De Bruyne cross put the ball on a plate for Aguero to fire home from close range and the pair combined again soon afterwards, with De Bruyne slipping the Argentine clear to score with a powerful finish.

Aguero, who has now scored in seven consecutive home games at Etihad Stadium, was not finished yet and helped himself to his fourth goal with a dinked finish from Schmeichel’s disastrous clearance.

And he completed the scoring with his best goal of the night, collecting the ball from substitute Phil Foden on the edge of the area and finding the net via the underside of the bar.