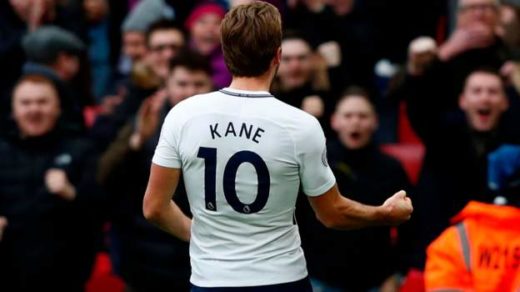 Harry Kane is “the present and the future” of Tottenham according to manager Mauricio Pochettino, following the striker’s match-winning display in Spurs’ 1-0 win over Arsenal.

He soared high above Laurent Koscielny in the 49th minute to direct a Ben Davies cross beyond Arsenal goalkeeper Petr Cech and move Spurs up to third in the table.

And it was only the defiance of Cech that kept a rampant Spurs at bay in the second half, producing a collection of outstanding saves to somehow keep Arsenal in contention as Pochettino’s side threatened to run riot.

It was a performance that almost earned outplayed Arsenal an unlikely point only for substitute Alexandre Lacazette to waste two last-gasp opportunities, the second when he was clear through on Spurs keeper Hugo Lloris but shot wide of the far post.

Spurs survived the scare – and such was their domination after the break that it would have been a travesty had Arsenal escaped Wembley, hosting a Premier League record attendance of 83,222, with a draw.

“Harry Kane is not old fashioned, he is the present and the future,” said Pochettino after it was suggested that the winning goal was one typical of a centre-forward. “We are so proud that he is in our side.”

Spurs’ recent form, which includes a 2-0 win over Man United and a 2-2 draw with Liverpool at Anfield, drew praise from their Argentine manager.

“I congratulate our players, we’ve had three massive games and it was an amazing performance.”