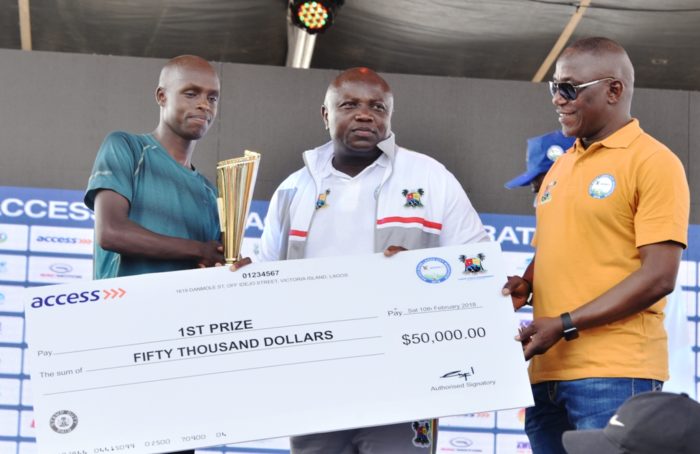 Lagos State Governor, Mr. Akinwunmi Ambode (middle), presenting a cheque of $50, 000 and a trophy to the winner of the 2018 Lagos City Marathon, Kenyan born French athlete, Abraham Kiprotich, (left) while the Minister of Youth and Sports, Barr. Solomon Dalung (right), watches during the 2018 Lagos City Marathon at the Eko Atlantic City, on Saturday.

Lagos State Governor, Mr Akinwunmi Ambode on Saturday unveiled plans to invest in training of Nigerian athletes to compete with elite athletes all over the world for the grand prize of the annual Access Bank Lagos City Marathon, saying that he is tired of giving the award to East African countries.

Speaking at this year’s edition of the tournament held at Eko Atlantic City (EAC), Victoria Island, Governor Ambode said he was tired of handing over the star prizes of the marathon to athletes from East Africa, assuring that concerted efforts would be made to reverse the trend and prepare Nigerians to compete favourably for the prizes.

“My promise to Nigeria is this; I’m tired of giving this award to the East Africans and so Lagos State is going to commit professional coaches and then we will go to Jos and then come back in two years’ time to give them (East Africans) fight for their money,” the Governor said.

He commended all the athletes and organizers who contributed to the successful hosting of the third edition of the tournament, assuring that efforts would be made to make the fourth edition which will take place on February 9, 2019 bigger and better.

“I just want to say a big thank you to all the participants and also the organizers. We have done Lagos proud again and we have done Nigeria proud again. This is the third edition and we are getting bigger, we are getting finer and this is what this is all about. We have had over a hundred thousand participants and we have broken all the records of last year and we are very excited about this.

“Yes, this is the bronze level; the intention is to take it to the gold level in the next two years and I know we can do it. This is more about the energy of Lagos. Beyond the fact that we are able to show the aesthetics and the improvement we have done in the last two and a half years, Lagos is getting better and then Lagos is getting more enjoyable.

“I know we are going to do this again next year and so come Saturday 9th February, 2019, we are going to have a bigger marathon and bigger prizes,” Governor Ambode said.

Besides, the Governor expressed excitement at the introduction of a 10km race dedicated solely for Nigerians, assuring that prizes in the category would be made to be at par with the main marathon in subsequent editions.

Also speaking, Minister of Youth and Sports, Solomon Dalung commended the State Government, organisers and sponsors of the Marathon, assuring that the Federal Government would partner with the State to prepare Nigerian athletes to compete at the top level with their foreign counterparts.

He also announced additional cash reward for Nigerian athletes who finished top in the male and female categories as well as young athletes.