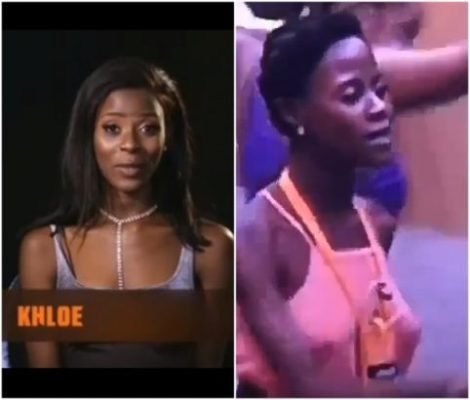 Khloe came up against Ifu Ennada and Bambam, with the latter losing out in the first round with zero points. This meant Khloe and Ifu Ennada went head to head after they both scored three points and six points respectively in a game of ball throwing.

Khloe officially became the latest boss of the house after she managed to grab more points than Ifu Ennada during the latter rounds of the contest.

She declared her naivety for the role and sought for help from her fellow housemates.

She said, “Guys please help me; I am a woman of many flaws”.

Traditionally, the HoH first assignment is to read the wager brief and lead the deliberation of the wager percentage.

“Kween” Khloe initially prompted for a 25 percent wager, however other housemates who were fed up with ‘poverty’ in the house having lost all their previous wagers opted for a 50 percent wager.

The latest HoH task has more consequence on the housemates compared to the previous two won by Tobi Bakare because “Kween” Khloe’s replacements during the nomination show will be put up for a potential eviction from the show.

“Biggie” announced two pairs will be leaving the house on Sunday, Feb. 18, during the live eviction show.

The nominees would be the first housemates to be evicted from the show after the two previous evictions were fake evictions.

The unique idea and theme of this year’s show “double wahala” means that K-Square made up of K-Brule and Khloe will have immunity from the nomination process which began on Monday.