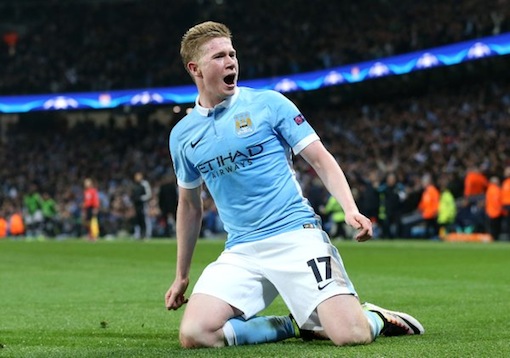 De Bruyne has been vital to Manchester City’s dominance this campaign with the 26-year-old notching a league-high 14 assists, including three in Saturday’s 5-1 rout of Leicester City.

“No doubt,’’ Guardiola told reporters when asked if the Belgian could win the prestigious individual award. “He is not (just doing it in) one game. It’s the whole season, every three days playing that way.

“But he knows and everyone knows, to be there you have to win titles — and titles and titles, especially one. But the way he’s played it’s difficult to find one (better) in Europe.”

De Bruyne has scored 11 goals and provided 18 assists across all competitions for Manchester City this season, helping them establish a 16-point lead atop the league table.

But the midfielder is not focused on individual honours.

“To be fair, when I am busy playing football I don’t care (about that),” De Bruyne said.

“At the end, if you get an individual honour, it is beautiful.”

Manchester City remain in contention to win the quadruple as they prepare for Tuesday’s match against Basel in the UEFA Champions League knockout stages.

This will be followed by an FA Cup fifth round clash against Wigan Athletic and the League Cup final against Arsenal.