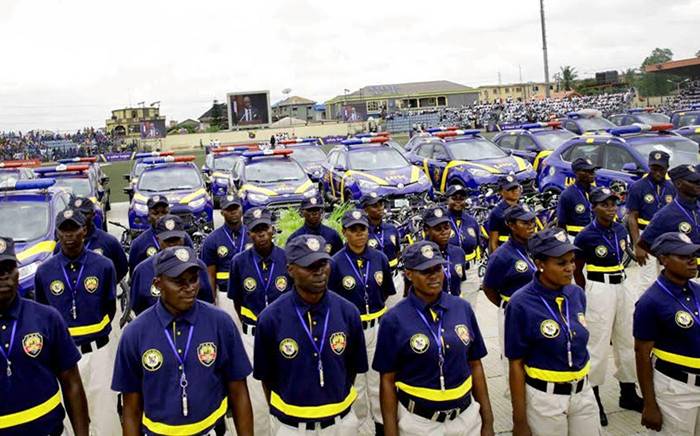 Lagos Neighbourhood Safety Corps, LNSC officers attached to Lagos Division at the weekend, arrested six members of a gang of pick-pockets at Tafawa Balewa Square during a prayer session organized by The Redeemed Christian Church of God, RCCG.

The LNSC team during one of its regular motorized patrol received an intelligence/distress call about the activities of the gang at the venue of the prayer session and swung into action immediately and with the cooperation of the members of the church, two members of the gang were apprehended, and taken to the Corps Custody for interrogation.

The interrogation later led to the arrest of four other members of the gang whose identity were made known by the two suspects earlier arrested.

They all confessed to have been involved in activities of pick-pocketing, stealing and burglary on Lagos Island.

It was also observed during interrogation, that all the suspects had one or two marks in different colorations, and identifications similar to the marks common among cult members and this made LNSC to hand-over the suspects to Lion Building Police Station for further interrogation and possible prosecution.

Meanwhile, the Board Chairman, DIG Israel Ajao (Rtd), reiterated that “LNSC was not established to harass anyone but to protect all and sundry in line with the policy of the present administration in the State which is centred on the people.

“But we need the cooperation of all to achieve a safer and secured Lagos, therefore all law abiding citizens should continue to go about their lawful businesses without any fear.”