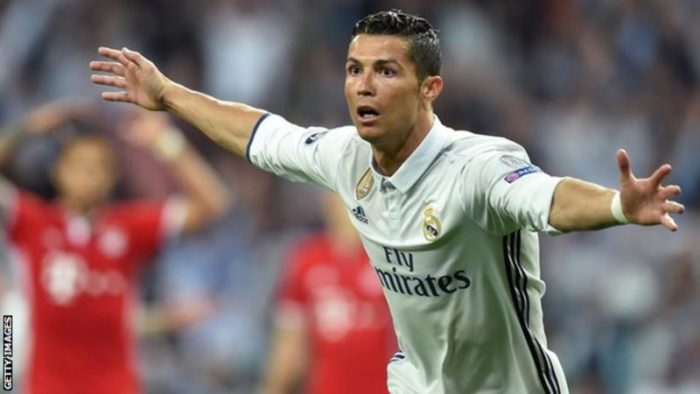 Cristiano Ronaldo scored a brace as Real Madrid thrash PSG 3-1 at the Bernabeu Stadium in the first leg of the Champions league game on Wednesday.

The Portuguese forward scored a late close-range strike after his penalty had cancelled out Adrien Rabiot’s opener at the end of a thrilling first half.

Brazilian left-back Marcelo wrapped up the victory minutes after Ronaldo’s tap-in with a goal created by Marco Asensio.

Last season, Zinedine Zidane’s Real became the first team to retain the Champions League and won La Liga for the first time since 2012.

This term they are already out of the Copa del Rey and fourth in La Liga, 17 points behind leaders Barcelona as pressure on their French manager has mounted.

PSG played their part in an end-to-end contest, with Neymar’s delicate assist for Rabiot a highlight and Kylian Mbappe forcing a strong save from Real goalkeeper Keylor Navas.

But the result puts Real in control heading into the second leg at Parc des Princes on 6 March.

However, Zidane’s side also survived a second-half penalty claim with the scores level when Rabiot’s shot hit Sergio Ramos high on the arm.