We are set for Edo LG election - Police 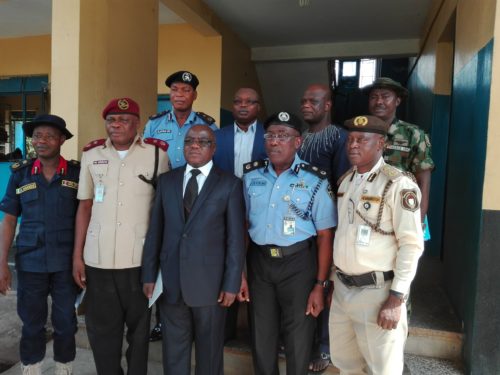 Heads of security agencies in Edo State have assured voters of their readiness to ensure a hitch-free local government council election, scheduled for 3 March, 2018.

The State Police Commissioner, Mr. Johnson Babatunde Kokumo, gave the assurance Wednesday in Benin, while addressing journalists after an inter-agency consultative meeting in his office.

Those present at the meeting were the State Director of the Department of State Service (DSS), Mr. Haliru Ibrahim, Samuel Odukoya of the FRSC, Eniolorunda Kayode of the Nigeria Immigration Service (NIS) and Mr. Makinde Ayinla of the NSCDC.

The Commander of the 4 Brigade, Nigerian Army, Benin, Brig.-General Garba, was represented by Let. Col. I. Yusuf at the meeting.

The police boss said the meeting was conveyed to “synergize and work out plans to ensure a hitch-free local government election. We are trying to replicate a sort of inter-agency consultative Committee

“We are taking adequate proactive measures to take care of possible challenges. So far, we are good to go. As security agencies, ours is to provide security before, during and after the election.”

The police boss who would not want to disclose the numerical strength of security operatives to be deployed for the election, however assured that there would be enough operatives to go round all the polling booths in the state.

“I want to assure you that we have security men all over the polling booths across the State,” Kokumo said.