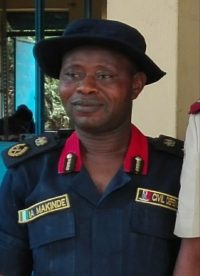 Protesting youths of Obadolovbiyeyi community, in Ikpoba-Okha local government area of Edo State, on Wednesday, held the State Commandant of the Nigerian Security and Civil Defence Corp (NSCDC), Ayinla Mankinde, hostage over the killing of a youth.

The youths also held some mobile policemen hostage with the NSCDC’s Commandant, for allegedly shielding the soldiers who killed the deceased from being arrested.

The protesters alleged that the victim, identified as Efe Igbinovia, was shot and killed by soldiers who were called by the herdsmen to protect them.

It was gathered that the vigilance men of the community, arrested two suspected herdsmen who were said to be members of an armed robbery gang who terrorised the community.

A member of the community, Okpamen Osemwengie, who addressed journalists in Benin, alleged that the suspected herdsmen blocked the Benin-Abraka by-pass road and were dispossessing people of their belongings.

“At about 1am, the community members​ heard some noise at the express road, ordering people to lie down.

“The vigilante group organised themselves and went to the scene and discovered that armed robbers were robbing people. When they got there, they discovered that they were herdsmen,” Osemwengie narrated.

He added that on sighting the vigilance men, the robbers tried to escape, but two of the gang members were arrested.

According to him, not too long after, armed uniform men suspected to be soldiers stormed the scene and opened​ fire, killing Efe Igbinovia who was asked to keep watch over the two arrested suspects.

“The soldiers, four in number and armed with Ak47, came with ash colour Honda car with registration number AP 641 KTN,” he further alleged.

It was learnt that two of the soldiers were arrested and detained at the Ugbekun police station, while the two arrested herdsmen were taken to the Edo State police command.

The youths also prevented the commercial bus marked BEN 864 AC, used by mobile policemen and NSCDC operatives from taking the suspected herdsmen out of the hospital.

It took the intervention of the State Commandant of the NSCDC before the suspects and the corpse of the victim could be taken out of the hospital to the headquarters of the Edo State Police Command.

The NSCDC Commandant, Ayinla Mankinde, while addressing journalists on the issue, said the Commander of Operations Thunderstorm, the State joint security outfit, received a distress call at about 2 am, adding that on getting to the scene, they met the corpse of a young man.

Mankinde, who related what the people of the community told him, said armed men came to the community to rob, and that the vigilance men arrested two of the suspected armed robbers.

He further disclosed that while the vigilance men were calling for reinforcement, they saw some persons in uniform, who allegedly spoke with the arrested herdsmen in a language not understood by the vigilance team, and that the armed men in military uniform immediately opened fire on the people killing one of them.

When the people of Obadolovbiyeyi community visited the Benin Central Hospital, they recognised a suspect brought to the hospital by the investigating police officer for treatment as one of the robbery suspects that they caught.

Makinde said the incident would be properly investigated by relevant security agencies.

When contacted, the image maker of 4 Brigade, Nigeria Army, Benin-City, Capt. Maidawa Mohammed, said he was yet to be briefed​.