Arisekola: “Half of Ibadan Mistaken for a Single Person” 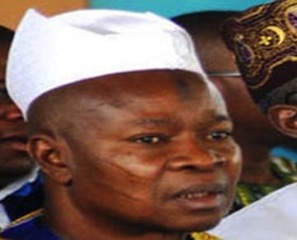 Alhaji Abdul Azeez Arisekola Alao would have been 72 years old today. All roads would have led to his palatial residence at Oluwo Nla for the big event. But he died almost three years ago. In the words of that Yoruba wordsmith, Alhaji Odolaye Aremu, Arisekola was “Idameji Ibadan ti won pe lenikan” (Arisekola was “half of Ibadan mistaken for a single person”).

My consciousness of the man Arisekola dates back to the mid-70s, when he was a regular feature in the long playing records of the reigning musicians of that era – Chief Ebenezer Obey, King Sunny Ade, Alhaji Sikiru Ayinde Barrister and Alhaji Odulaye Aremu, to mention a few. The trio of Alhaji Arisekola Alao, Chief Akanni Aluko and Chief Adeseun Ogundoyin dominated the social scene like the roaring lions dominated the jungle.

That was before he exited the social circuit for the Islamic world. Aare Arisekola became the Aare Musulumi of Yorubaland in 1980 and devoted the vigour and energy with which he dominated the social scene as the celebrated Oyinbo oni Datsun to the service of Islam.

Only few men in these parts had “romanticised” wealth like the way Arisekola did. The very few men in this privileged tribe included Chief M.K.O Abiola and much earlier, Candido Joao DaRocha of Ilesa, whose name became a synonym for wealth.

I met him for the first time about 1992. My celebrated and heavily decorated editor at the Sunday Tribune, Folu Olamiti took two of his reporters, Wale Adebanwi, now the Rhodes professor of Race Studies at the prestigious Oxford University, United Kingdom and myself on a visit to the Aare. He had reportedly requested to meet these two reporters whose stories had become permanent features on the front pages of Sunday Tribune. It was at his house on the exclusive Rotimi Williams Street in Bodija, Ibadan. It looked uncompleted from the outside, but the interior was classic luxury.

“O ni temi”, he enthusiastically thumped our palms in turn to welcome us to his presence. Nothing prepared me for the experience. He was in a white T-shirt and white shorts. Very small in stature and very much younger than the man one imagined under the big turban and very expansive and heavily embroidered babanriga that was his trademark.

He was a very friendly and chatty man. He moved from one topic to another, emotionally expressing strong views on each one. I cannot recall the subjects of discussion that evening but I still recall how his face brightened up as he marshalled his arguments in Ibadan/Oyo dialect in the chat with our editor. There was no pretext. He took it upon himself to serve us drinks, moving from one person to the other.

In later encounters, I marvelled at the congruence of the Christian and Islamic faith in the residence of the Aare Musulumi. He was an Islamic leader but was actively involved in the determination of the leadership of many Christian groups and associations. He didn’t need to go in search of such role. They brought the role to his house. So was it with Islamic groups, student unions, labour groups, the traditional institutions, musicians, artists, artisans, etc.

There are every few men in this clime who are generous like Arisekola. No wonder his house was the melting point of Ibadan. If there is a prominent personality in Ibadan you have not seen for a considerable length of time, you are most likely to meet him during a casual visit to Arisekola’s house. His residence was a magnet of sorts.

His generosity is as legendary as that of Mansa Kanka Musa of the Mali Empire fame. The governor of Oyo State, Senator Abiola Ajimobi is never tired of recalling his first encounter with the Arisekola on his (Ajimobi’s) return from his sojourn in the United States of America. According to him, he had attended a party in Ibadan, where one man who was a guest dominated the entire scene by spraying musicians and guests alike with crisp new naira notes. Just coming from a clime not conversant with such display of wealth, he enquired who the person was and everyone chorused, “Oyinbo o ni Datsun” (The Datsun merchant).

That was one leg of the story. The second leg, which Arisekola always enjoyed, as the governor with his power of the garb often recalled, was that Arisekola spent so much money that night that those of them who came to the party with girls could not get all the girls to go back home with them. “No one knew how the girls vamoosed”, he would assert to Arisekola’s loud guffaw.

Arisekola’s uncommon generosity did not miss the attention of the Islamic world. He was one of the very few personalities from across the world granted the privilege of partaking in the washing of the Kabbah by the King of Saudi Arabia and custodian of Islam’s holiest mosque. It couldn’t have been different for a man who in one year, reportedly took about 500 pilgrims to Saudi Arabia, paying for their transportation, accommodation and providing other sundry allowances.

But that was before he became the Aare Musulumi of Yorubaland. Arisekola was to say in one of our encounters that it was his appointment as Aare Musulumi that rescued him from the social circuit. “We were reckless with money”, he said on one other occasion as he relived with nostalgia, his youthful exploits with another comrade of his in the social circuit in the 70s, Chief Abiola Ogundokun. “We would spray all the money we took to a party on Sunny Ade, then remove our wristwatches and use them as collateral to borrow extra money from Sunny Ade and spray him with the money all over again. We only retrieved our wristwatches after visiting the bank on Monday to collect more money, again for Sunny Ade.”

Arisekola’s greatest passion was for Islam and Ibadan. I have not met any Ibadan man who has as much pride in his Ibadan ancestry as Arisekola. His world revolved around Ibadan and everything that symbolised the great city. He celebrated Amala and never shied away from telling anyone who cared to listen that he never ate rice but could eat Amala, the staple food of Ibadan, three times a day.

Arisekola was not a politician if defined by the membership of a political party. He didn’t need one because he belonged to all the political parties. In the Second Republic when he strongly identified with the National Party of Nigeria (NPN), Arisekola was a major financier of the personal lifestyles and political aspirations of many leaders of the rival Unity Party of Nigeria (UPN). Until his death, he sponsored the aspirations of politicians of different and indeed rival political parties. He financed all parties in all elections. You only know his preference by identifying who received the highest financial support from him. In one instance, Arisekola, in support of a gubernatorial candidate, set up his own campaign team and handed over to them N30 million each day of the 40 days preceding the election. In another election, he procured 25 new vehicles for the campaign train of a gubernatorial candidate, even when his associates claimed that he was the biggest financier of the rival candidate.

But there is no arguing the fact that his greatest ally in politics and in the affairs of Ibadan was the strongman of Ibadan politics, Alhaji Lamidi Ariyibi Adedibu. Between the two men are stories that will easily stroll into the Guinness Book of Records. One of the most celebrated is Arisekola’s visit to the Molete residence of Adedibu. Adedibu was in the middle of his Sallah prayer when Arisekola walked in. He promptly suspended his Sallah to attend to his visitor. When he was asked why he did so, he responded that his prayer point was for God to give him money. Arisekola’s coming was the evidence that the prayer had been answered because Arisekola never walks alone; he was always heavily laden with money. “If Arisekola should leave, God will punish me that he had answered my prayer but I refused to accept it!”

There is a more hilarious story of Adedibu and Arisekola’s Zoo. Arisekola has decided to set up a zoo in his new palatial residence at Oluwa Nla. Adedibu volunteered to get the lions from Senegal. When after a long wait and several entreaties it appeared no lion was going to be delivered, Arisekola became agitated. One day, Adedibu walked into Arisekola’s residence and volunteered: “Aare, ati na owo awon kiniun re o, bo ba ju awa na sinu zoo k’awon ara Ibadan o ma wa wowa mbe” (Aare, we have spent the money you gave us to buy lions from Senegal. You may wish to throw us into the cage so that the people of Ibadan can come to watch us as they would have come to watch the lions). Both old men had a very hearty laughter. Their friendship continued.

Arisekola’s 73rd birthday celebration would have provided the platform for the Ibadans to discuss and possibly amicably resolve the fledging Olubadan Chieftaincy dispute. But as the Yoruba say, ina dile lehin asun isu je (The fire place is left in silence as the roaster of yam is away from home).

Like every mortal, Arisekola had his weaknesses but he was a man that Ibadan will not forget in a very long time to come. He touched so many lives. In the words of Odulaye Aremu, Arisekola was “the big umbrella that provided shade for the people of Ibadan” (and beyond).

May God forgive his sins.

Tags:   Arisekola: “Half of Ibadan Mistaken for a Single Person”