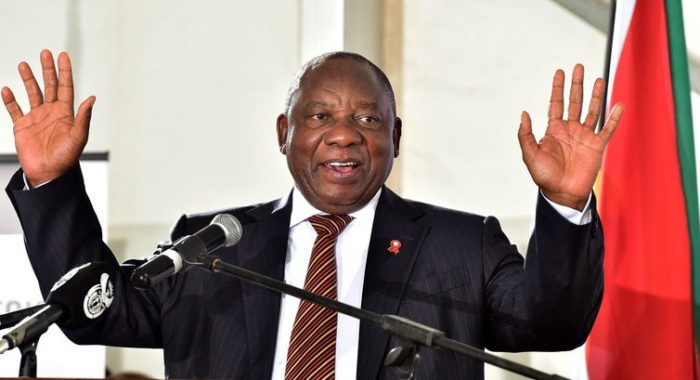 Cyril Ramaphosa on Thursday was elected President of South Africa by parliament after Jacob Zuma resigned overnight, heeding orders of the ruling African National Congress to bring an end to his nine scandal-plagued years in power.

Ramaphosa, 65, has put the focus on rooting out corruption and revitalising economic growth.

Experts said Ramaphosa, president, is likely to face a number of challenges in reforming the country’s economy and political system while in office, experts said.

Zuma, in power since 2009, resigned on Wednesday after being accused of corruption, prompting the opposition to repeatedly call for his resignation.

Commenting on Ramaphosa’s accession to the presidential office, a number of experts told Sputnik that the new administration would take steps to cope with the existing South African problems and change government policies.

The director of research at the Department of Politics and International Studies at the University of Cambridge told Sputnik that in comparison with Zuma, South Africa under Ramaphosa would see quite a different approach to political relations within the state and the economic system of the nation.

“Ramaphosa is no saint. There are no saints in politics, but all of the indicators seem to suggest that he is going to be a very different kind of leader to the leadership of Jacob Zuma over the last decade.

“First of all he seems to be a very good rhetorician, which is very good for politics …

“All of these things are important in politics,” Lawrence Hamilton said.

The scholar added that Ramaphosa would also become one of the best candidates for economic transformation and anti-corruption steps.

“He’s got a very hard task on his hands, both in terms of that and in terms of rooting out corruption, but I think that South Africans have a great deal to look forward to,” the University of Cambridge official added.

Speaking about the difficulties in South Africa’s economy, James Hamill, a lecturer at the University of Leicester, told Sputnik that Ramaphosa was rather a competent politician and manager and could take steps to improve the economic situation while in office.

“This is a huge task as the economy is floundering but Ramaphosa is a far superior politician, a much more competent manager, he currently enjoys the confidence of both business and organised labor and the confidence of international investors and ratings agencies,” Hamill said.

The scholar from the University of Leicester added that if the incumbent South African deputy president became the country’s leader, he would have to end with “the dysfunctional governance and corruption of the Zuma era.”

The executive chairperson of South Africa’s Democracy Works Foundation non-profit organization also told Sputnik that if Ramaphosa takes office he would fight against corruption in the nation in order to meet expectations of his compatriots.

“Already the things he’s done, people are saying that he’s doing something.

“You know, I think he is going to be focused on corruption as a big thing because the thing is, in South Africa a lot of the reason why the economy is not growing.

“Why we don’t have the jobs, why the state is not functioning, why ordinary black people who are poor are not getting their houses or their jobs, or a good education or health, is corruption.

“A big part of it is corruption,” William Gumede said.

The expert stressed that the corruption should be defeated as the country’s economy was suffering huge losses due to this phenomenon.

The ongoing power transition from Zuma to Ramaphosa is not the only one in Africa in recent months.

In November, Emmerson Mnangagwa, Zimbabwe’s former vice president, was sworn in as president.

The inauguration took place after the army deployed its vehicles to the capital of Harare and confined then-President Robert Mugabe to his house.

The Zimbabwean parliament subsequently approved Mugabe’s impeachment, after which the long-serving leader stepped down.

Commenting on the two power transitions, experts approached by Sputnik said that the situations in Zimbabwe and South Africa did not have a lot in common and the ongoing developments in the latter were within the constitutional framework.

According to Hamill, Mugabe stepped down after the military intervened in politics, while the situation in South Africa was of democratic nature.

“Given that two leaders have been removed in both countries in such a short space of time comparisons are inevitable.

“They are not compelling … Zuma is being removed as a result of an entirely legitimate constitutional process.

“He has lost the confidence of his party which has recalled him from office, if he refuses to accept that he will be removed by parliament,” the University of Leicester official added.