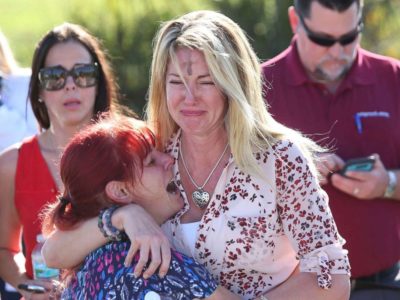 Women embrace in a waiting area for parents of students after a shooting at Marjory Stoneman Douglas High School in Parkland,

A gunman opened fire at a Southern Florida high school today, killing at least 15 people and sending students running for their lives, according to two law enforcement officers on the scene.

At least 14 victims were taken to hospitals from the incident at Stoneman Douglas High School in Parkland, the Broward Sheriff’s Office said, though their conditions were not immediately clear.

The suspect was taken into custody off campus but the scene is still active as SWAT teams clear the school, the sheriff’s office said.

The suspect slipped out of the school after the shooting by blending in with other students who were trying to escape, according to two law enforcement sources and an eyewitness.

The suspect’s name is Nicolas Cruz, according to multiple law enforcement sources.

The sheriff said Cruz is believed to be about 18 years old and is not a current student. He had attended the school but it is not clear when he left, the sheriff’s office said.

Student Michael Katz told ABC News that at the end of the day he “heard what sounded like a garbage truck like banging.”

“Then also I hear, ‘Boom, boom, boom.’ I hear screaming everywhere,” he said. “I just got underneath my teacher’s desk.”

“We had police invade the school, and we were taken out,” Katz said. “Fortunately, my father was there to pick me up.”

One mother shaking with worry told WPLG her daughter said she was OK, huddled in a locked classroom.

Freshman student Samuel Dykes told the Orlando Sentinel that he was on the third floor of the school when he heard gunshots.

Officers told students to look forward as they evacuated, but Dykes told the newspaper that he saw several bodies in a classroom.

Another mother told the affiliate that her daughter “keeps telling me to stay away. ‘Be safe, Mom, stay away.'”

“I won’t stay away,” she said, telling her daughter, “I’m your mother.”

The school district said in a statement that close to “dismissal, students and staff heard what sounded like gunfire. The school immediately went on lockdown but is now dismissing students. We are receiving reports of possible multiple injuries. Law enforcement is on site.”

There are over 3,000 students at the school, according to its website.

President Donald Trump tweeted, “My prayers and condolences to the families of the victims of the terrible Florida shooting. No child, teacher or anyone else should ever feel unsafe in an American school.”