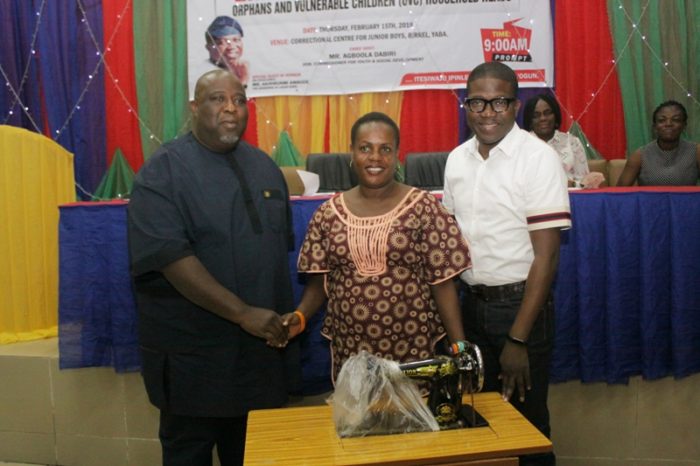 Commissioner for Youth and Social Development, Mr. Agboola Dabiri (left) presenting empowerment tool to a beneficiary, while the Permanent Secretary, Muri-Okunola looks on.

Lagos State Government on Thursday presented empowerment tools to Orphans and Vulnerable Children, OVC Household Heads as a way of making the beneficiaries self reliant in their various trades and vocations.

Presenting the empowerment tools to beneficiaries at the Correctional Centre for Junior Boys, Sabo, Yaba, the Commissioner for Youth and Social Development, Mr. Agboola Dabiri said that it was the desire of the state government to ensure that all households in the state had sustainable income to meet the basic needs of life in alignment with the Sustainable Development Goals on poverty alleviation.

According to the commissioner, the state government knew that not having a means of economic sustainability did not only have a devastating emotional and financial effect on already vulnerable households, but that the situation was also capable of exposing the individual to several risks such as early marriages, child labour, deep debt profile, vulnerability to health issues and a cycle of multi generational poverty.

While saying that the household Economic Strengthening programme was introduced to enhance the capacity of households with vulnerable children to be self reliant, the commissioner added that the gesture would help the households to respond adequately to hardships without long term negative consequences.

He assured those who were yet to benefit from the initiative that the programme would be a continuous exercise to assist different vulnerable households till every OVC household in Lagos State are empowered.

The commissioner charged the beneficiaries to use the various tools given to them by the state government to contribute to the economic and financial advancement of their families, the state and the country as a whole.

“To the beneficiaries of today, I say congratulations and urge you to put into use all the tools you have been provided with by the government free of charge in other to reduce the hardship your individual families have been facing. I wish you success in all endeavors”, the Commissioner reiterated.

The Permanent Secretary of Ministry of Youth and Social Development, Mr. Hakeem Muri-Okunola said that the empowerment programme for OVC further demonstrated the resolve of the present administration in the State to inclusively deliver on its mandates.

He added that the empowerment had been tailored towards the job experiences of each households to provide for the essential needs of the children in their care and to ensure that vulnerable children were able to access essential services, including safety, healthcare, education and other basic needs.

“The Governor, Mr. Akinwunmi Ambode wants all sectors in the state to benefit from his all inclusive governance. This explains why he approved the empowerment of the vulnerable households in order to increase economic independence and improve people’s ability to provide for their children,’ he said.

The Secretary of one of the Association of OVCs, Biola Ajayi, described the empowerment initiative as a big relief, saying that “this is first of its kind and it is also the first time that members of this association will be remembered by government for empowerment programe.”

She encouraged all the beneficiaries to make good use of the equipment as it would go a long way to assist their self reliance.