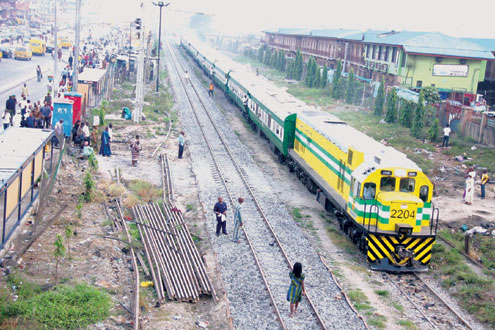 The Nigeria Railway Corporation (NRC) has warned the public to desist from trading and walking on rail line as such acts were suicidal.

Mr Yakub Mahmood, the NRC Deputy Director, Public Relation, gave the warning in an interview with the News Agency of Nigeria (NAN) on Thursday in Lagos.

According to him, it was completely unlawful for anyone to display goods or trade on the rail line.

“The rail is not meant for trading, we warn the public to desist from walking, hawking or trading on the tracks.

“We strongly advise the public to desist from the habit of listening to music with their phone earpiece on the road talk less on the rail line because it’s tantamount to suicide mission,’’ he said.

Mahmood said that it was reported that a moving train crushed a 37 year-old man along Agege corridor while listening to music with an earpiece.

According to him, a rail track is not a walking space for people, adding that people must be watchful and careful when crossing the rail.

“We cannot because of urbanisation turn the rail lines to market place; it is unlawful and suicidal,’’ the NRC spokesman added.

Mahmood said the corporation sympathised with the family of the deceased and prayed that God would give them the fortitude to bear the loss.

A man was on Tuesday crushed to death by a train at Ikeja area of Lagos.

The train coming from Sango area in Ogun State towards Iddo Terminus in Lagos killed the young man in his mid-30s at about 8 a.m. around Ajayi Farms at Anifowoshe Area of Ikeja.

The victim was said to have died instantly after being knocked out from the rail track by the fast moving train.

The deceased could not hear the sound of the approaching train as he had his phone earpiece on.