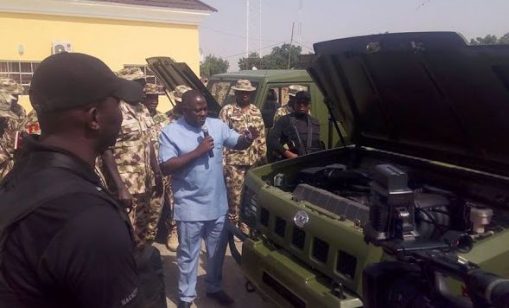 The House of Representatives has urged the Federal Government to make it compulsory for Ministries, Departments and Agencies (MDAs) to procure only cars manufactured or assembled in Nigeria.

This was sequel to a unanimous adoption of a motion by Rep. Omoregie Ogbeide-Ihama (Edo-PDP) at plenary on Thursday.

In the motion, Ogbeide-Ihama said that the automobile market was a multi-billion naira venture in Nigeria, given its large population and huge reliance on road transport.

He said that government at all levels, being the highest spender in Nigeria, was a major buyer of automobiles in the country.

According to him, over 95 per cent of the automobiles procured by MDAs are neither manufactured nor assembled in the country.

Ogbeide-Ihama recalled that some years ago, automobile manufacturing companies like Volkswagen, Mercedes Benz and Peugeot, had functional assembling plants in Nigeria.

He said that automobile companies outside Nigeria whose vehicles are sold in the country did not pay direct taxes to the Federal Government in spite of the revenue being generated from the country.

He listed the benefits of having either manufacturing or assembling plants in Nigeria to include technology transfer, employment for Nigerians, revenue through taxes, reduction in balance of trade deficit, increased GDP and safety specification.

The lawmaker said that Nigeria had been relegated to the role of a ready market for automobiles manufactured in more developed economies of the world.

According to him, the only way Nigeria can break off the shackles of being a perpetual market for other economies is by pursuing a deliberate policy on automobiles.

In his contribution, Rep. Johnson Agbonanyinma (Edo-APC) said that local manufacturing or assembly of automobiles would revitalise the rubber, iron and steel sectors.

He said that the sectors would produce raw materials for making tyres and steel needed by the automobile companies, hence, creating jobs and boosting the economy.

Agbonanyinma said that the motion came at a very important time and urged other members to support it for the growth of the economy.

After the contributions, Speaker of the House, Mr Yakubu Dogara, mandated the Committee on Industry to ensure compliance and also investigate why the once-booming automobile industry in the country collapsed.