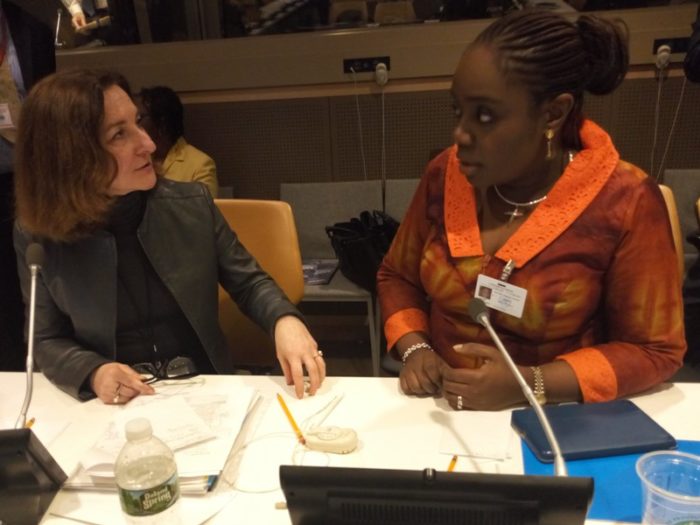 The Honourable Minister of Finance, Mrs. Kemi Adeosun discussing with the Chairperson of the Illicit Financial Flows Panel of the Platform for Collaboration on Tax (PCT), Grace Navarro, during the PCT Conference organised by the the Organisation for Economic Cooperation and Development (OECD), World Bank Group, International Monetary Fund and United Nations in New York on Thursday.

Nigeria and global organisations, including the Organisation for Economic Cooperation and Development (OECD) and the World Bank Group, have agreed on high-level collaborations with Nigeria and other African countries to stop Illicit Financial Flows (IFF) in Africa.

This is coming as Nigeria’s Minister of Finance, Kemi Adeosun said Africa lost $80 billion annually through IFF, with Nigeria accounting for a significant portion of the loss.

The decision to stop IFF was a major resolution reached at the ongoing Platform for Collaboration on Tax (PCT) Conference at the United Nations in New York.

The Head of OECD Global Forum on Exchange of Information, Ms. Monica Bhatia, who disclosed this on Thursday at the PCT Conference, stated that automatic information sharing had been adopted as part of proactive steps to curtail the IFFs from the African continent to developed countries..

“The Sustainable Development Goals (SDGs) specifically says that we must significantly reduce illicit financial flows by the year 2030. A lot of efforts are ongoing to achieve this and support developing countries to end the IFFs,” Bhatia said.

In her address at the conference, Adeosun affirmed that the IFF was a problem that urgently required global focus and actions towards the realisation of significant developmental progress for Nigeria and other developing countries.

Adeosun said, “The IFFs are driven by the desire to hide illicit wealth, hide the proceeds away from the public eye and law enforcement agencies and also conceal the ways and means by which illicit wealth was created. This makes it difficult to trace the associated money flow.

“Developing countries, including Nigeria, collect significantly lower levels of tax, as a percentage of Gross Domestic Product (GDP), than wealthier States. This is partly because the income and wealth being created, is taken out of the country illegally, without being taxed.”

Quoting the report of former South African President Mbeki’s High-Level Panel on IFFs, the Minister said Africa loses US$80 billion annually to IFFs, with a significant percentage of the loss coming from Nigeria.

She disclosed that the Nigerian Government had engaged a leading international Asset Tracing and Investigation Agency (Kroll), to trace and track illicit flows and assets.

In addition, she said Nigeria had signed the Multilateral Competent Authority on Common Reporting Standards, which allows for exchange of financial account information.

The country, according to her, is expected to effect the first exchange by 2019 as soon as the domestic legal framework was completed.

She added, “Nigeria has adopted the Common Reporting Standards and the Addis Tax initiative aimed at improving the fairness, transparency, efficiency and effectiveness of the tax system.

“Furthermore, as part of open government partnership Nigeria has included in the national action plan a commitment to establish a public register of beneficial owners. To this end, the Corporate Affairs Commission, the custodian of Nigeria’s company registry, is pursuing relevant amendments to the Companies and Allied Matters Act to comply with global standards.”

As part of measures to tackle IFFs, Adeosun called for the tightening of Nigeria’s tax codes and tax laws that encourage tax avoidance as well as strengthening of the tax system to make it more efficient.

She further called for the elimination of safe havens that provide incentives for transfer of stolen assets and illicit financial flows abroad, and also the development of a supportive, efficient and speedy process for returning assets to originating countries.

On the Voluntary Assets and Income Declaration Scheme (VAIDS) introduced by the Federal Government in June 2017, she explained that the tax amnesty was targeted at increasing the tax payer base, raising revenue and regularising the tax status of many Nigerians.

She noted that the scheme was aimed at raising at least $1 billion and bringing in four million new tax payers into the tax net.

“We are using technology to improve the accuracy and efficiency of the programme. Project Light House is using advanced data mining and data analytics techniques to: identify tax defaulters, establish their tax liabilities and send notifications.

The PCT Conference is a collaborative initiative of the Organisation for Economic Cooperation and Development (OECD), World Bank Group, International Monetary Fund and United Nations.

The inaugural PCT Conference, which has as theme “Taxation and the Sustainable Development Goals (SDGs)”, is focusing on the opportunities and challenges for taxation and its role in supporting the SDGs.

It covers practical aspects of tax policy and administration, as well as encourages an open change of experience and views on how to ensure taxation policy and practices can improve SDG outcomes.