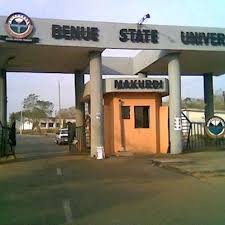 The management of the Benue State University on Friday postponed its planned session examination over students’ protest.

The leadership of the students’ union, barricaded the entrance gate to the institution as early as 6 a.m to protest management’s directive of `no fees, no examination for any student’.

Some of the students, who carried placards with various inscriptions, told NAN that the state-owned institution’s decision was not justifiable, since the state government also owed their parents salary arrears and allowances.

Some of the placards had inscriptions like: “What will our parents use for payment of school fees, when salaries of over a year are not paid?”

Some of the students, who spoke with NAN, called for the immediate intervention of the state governor on the issue.

According to them, the state government’s inaction had left our parents in terrible financial situation.

Charity Akor told NAN that her parents were both civil servants, owed back log of salaries, but have three of their children in higher the institutions.

Mike Ibiam, also a student told NAN that “this is a state institution and the government must show understanding with the students.

“This is so because the state government that owns this institution, had also not paid its workers, our parents, who need their wages to pay our fees,‘’ he said.

However, as at the time of filing this report, management of the institution had announced the immediate suspension of examinations, scheduled to have commenced Friday, but no official of the school was willing to comment on the situation.