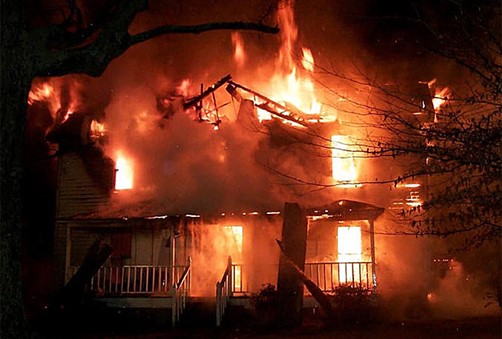 A final year student was killed by a mysterious fire that razed down a students’ hostel at the Federal Government College, Daura in Katsina State, on Friday.

According to Malam Isyaku Manir, the Daura Zonal Fire Officer, the fire, which started at 10.15 a.m., raged on for three hours and reduced the entire structure to ashes.

“The corpse of the victim – Haruna Rilwan – was discovered in the ashes of the destroyed building,” Manir told the News Agency of Nigeria (NAN), adding that he had been buried in Daura.

He said that the cause of the fire had not been ascertained, but disclosed that Rilwan was burnt beyond recognition.

“It was his colleagues that identified him,” he said.

The fire officer said that he had met with the school management to consider measures to be taken to avoid a recurrence.

“I have advised the school to mount fire extinguishers across strategic areas.

“I have also advised the school to ask its workers to ensure that electrical appliances are always disconnected while hostel workers should be more vigilant to stem the smuggling of gas cookers and cooking stove into the school.”

Alhaji Abdurrazak Gold, the school principal, who described the incident as “unfortunate”, declined further comments, saying that he was a civil servant barred from granting press interviews.

Also reacting , Alhaji Masaud Danjuma, Chairman of the school’s chapter of the Parents Teachers Association PTA), described the incident as “unfortunate and saddening”.

He said that the association had held an emergency meeting with the school management to determine the cause of the fire and how to avoid a recurrence.