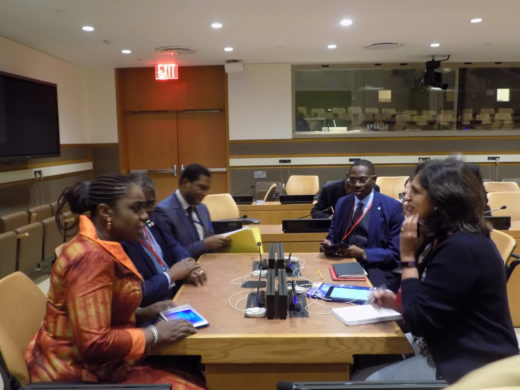 Minister of Finance Kemi Adeosun (left) with Ms Monica Bhatia, Head, OECD Global Forum on Exchange of Information during a meeting on the sideline of the Platform for Collaboration on Tax Conference at the UN Headquarters, New York

Nigeria is the biggest loser of the 50 billion dollars illicit financial flows out of Africa annually, Minister of Finance, Mrs Kemi Adeosun, has said.

Adeosun stated this while speaking on the issue of taxation and revenue leakages at a tax conference organised by the Organisation for Economic Cooperation and Development at the UN Headquarters in New York.

Adeosun was on a panel that discussed ‘Revenue Leakages: Illicit Financial Flows’.

She said Nigeria had one of the lowest tax to Gross Domestic Product (GDP) ratio in the world at just six per cent.

The minister explained that when the administration of President Muhammadu Buhari came on board, it met an empty treasury, adding the situation was compounded by the collapse of the oil price.

She regretted that Nigeria also suffered from tax avoidance and evasion, saying Nigeria has no tax laws as the tax laws are poor and weak.

To address the challenges, Adeosun said the Federal Government constituted a committee to review entered into several international treaties and also embarked on updating its tax laws.

He said the government also constituted a committee to review and update the tax laws in the country to make them efficient.

The minister said the nine months of amnesty given to tax defaulters through the Voluntary Asset and Income Declaration Scheme to regularise their tax information would lapsed in March 2018.

She said Nigerians who had sought haven abroad were in for a tough time as the Federal Government had commenced the sharing of information on Nigerians who owned property and bank accounts overseas.

According to her, some foreign countries, including the UK, have commenced with Nigeria the Automatic Exchange of Tax Information.

She, however, lamented over the frustrations the Nigerian Government encountered in getting illicit funds stashed abroad repatriated to the country.

Adeosun regretted that the amount of money Africa lost through illicit financial flows was more than the aid coming into the continent, citing the Thabo Mbeki’s Committee Report.

“On the part of the destination countries, the simple that we have from the developing nations perspective is: ‘why do they not ask questions when the money is coming in?’

“And yet when we turn up and say this money was stolen, then they give you an entire questionnaire. We’ve battling with the Swiss on Abacha.

“Abacha loot sat in the Swiss Bank account, 320 million dollars, for 22 years. We’ve been battling through the courts and we still have more recent cases.

The minister also held a private meeting with the Head of OECD Global Forum on Exchange of Information, Ms Monica Bhatia, on the sideline of the Platform for Collaboration on Tax Conference.

Alongside the Chairman, Federal Inland Revenue Service, Mr Tunde Fowler, the meeting focused on Nigeria’s efforts for developing international networks and collaboration with other countries to secure tax payer information.

The inaugural conference, which had as theme “Taxation and the Sustainable Development Goals (SDGs)”, focused on the opportunities and challenges for taxation and its role in supporting the SDGs.

It covered practical aspects of tax policy and administration, as well as encourages an open change of experience and views on how to ensure taxation policy and practices can improve SDGs outcomes.