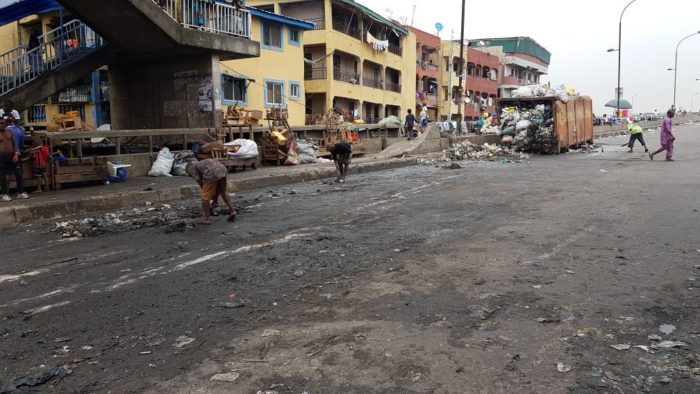 A cleared site by Visionscape

Some vested interests are working hard to sabotage the new waste management policy of the Lagos State Government, investigations have revealed.

The new policy encapsulated in the Cleaner Lagos Initiative (CLI) was introduced to address the challenges in the sector, and as well revolutionize waste management in the State in line with international best practices.

Multiple officials of the CLI, who preferred not to be named, said the rate at which those sabotaging the efforts to rid the State of filth was alarming and worrisome.

A senior official of the CLI said it was unfortunate that those who felt the new arrangement would affect them adversely were working hard to sabotage it by all means, including deliberate dumping of large waste in public places.

The official, who is fully abreast of the issues, said: “Take for instance, the picture of heaps of refuse under the Idumagbo Pedestrian Bridge that was published today in a national daily. The refuse at that spot was evacuated just overnight and the team finished by 3am today (Sunday) and by 3am, the heap of refuse was back there, including a fully loaded LAWMA big refuse container that was not there previously.

“As I am talking to you, our officials have returned to the same spot to clear everything. The Commissioner of the Environment was also there to see things for himself and he has asked the Private Sector Participant (PSP) operator that dropped the container belonging to the Lagos State Waste Management Authority (LAWMA) on the spot to remove it immediately.

“That has been the challenge. When our officials clear the heaps of refuse from a spot, before one could say Jack Robinson, the heaps were back on the same spot cleared by our officials and this really has to stop because a cleaner Lagos is in our collective interest,” he said.

A source said the permutation of those behind the sabotage was that if they kept dumping tonnes of refuse in public places, they would achieve the twin objective of distracting CLI officials from paying adequate attention to other places while projecting the initiative, which is targeted at a comprehensive turn around of Lagos to become one of the cleanest cities in the world, as a failure.

Another reliable source said the situation had also been compounded by members of the public who indiscriminately dump their waste in public places and not the designated spots, saying that such was also a challenge.

Also, in a recent video that went viral on social media, an official of Visionscape Sanitation Solutions, Mr John Olawale Joseph, had lamented how people were dumping refuse on the same spots in public places, thus frustrating the efforts to rid the State of filth.

Joseph, who is Visionscape’s Area Manager for Lagos Island West, alleged that heaps of refuse sometimes appear overnight in places already cleared by environmental officials, saying that the deliberate sabotage of the project called for concern.

Speaking at Obalende moments after waste in the spot was evacuated by his team, Joseph said he could not understand why anyone would deliberately dump waste in large quantity just few minutes after they cleared the same spot.

In the said video, a man wearing LAWMA uniform was seen fleeing from arrest after illegally dumping waste in the same spot.

“We evacuated the waste from here with nine trucks just 20 minutes ago. As you can see now, people have already dumped waste on the same spot and by tomorrow morning or afternoon, you will see heaps of refuse here approximately 200 tonnes. We evacuated waste from here just 20 minutes ago and it is already pilling up; this is what we are facing here.

“What we have noticed is that some people wearing LAWMA uniform are coming to dump waste here in large quantity to make it look as if we are not working. This is bad and something urgent has to be done about it,” Joseph said in the video.

The Majority Leader of the House of Representatives, Hon Femi Gbajabiamila on Saturday urged residents of Lagos State who are in the habit of indiscriminately disposing waste in public places to desist from such act, and rather join hands with the State Government to ensure the success of the Cleaner Lagos Initiative (CLI).

Honourable Gbajabiamila said it had become expedient to impress it on residents who are always dumping waste on roads and public places to refrain from doing so henceforth in order to bring about a cleaner and healthier environment.

The Lagos State Government had also banned cart pushers from operating in Lagos State as part of the measures taken to ensure the success of CLI.