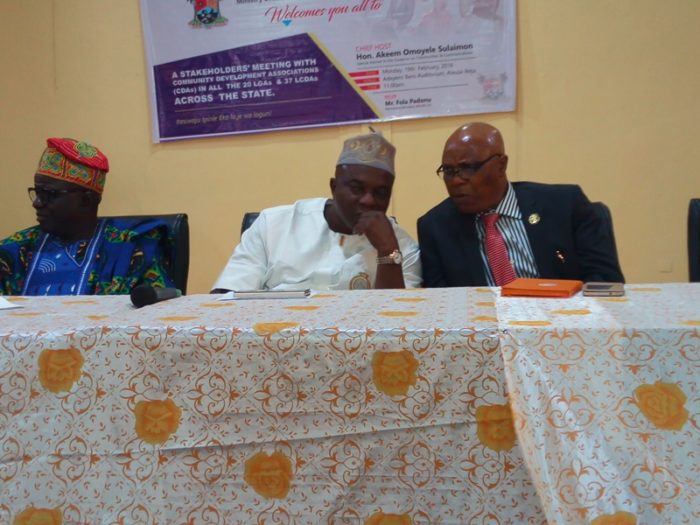 The Lagos State Government has concluded arrangement to empower communities to execute over 250 self-help projects across the 20 Local Governments and 37 Local Council Development Areas, LCDAs of the state.

Special Adviser to the Governor on Community and Communications, Akeem Sulaimon disclosed this on Monday at a stakeholders’ meeting with Community Development Associations, CDAs in all the 57 councils held in Alausa, Ikeja, Lagos, Southwest Nigeria.

Sulaimon stated that the essence of the meeting was to look at the self-help projects the communities could execute with the help of the government, saying that Governor Akinwunmi Ambode had vowed that all councils in the state must be touched and be made to feel the impact of government.

According to him, the projects would be funded by government to complement the efforts of the people at the grassroots.

“The government realized that the residents could embark on these projects which were sometimes stalled due to paucity of funds. The residents have shown the zeal and desire for the projects. We have realized that we do not just sit down and decide for the resident always, rather, we need to engage them on what they need,” he stated.

Senior Special Assistant to the Governor on Community Affairs, Alhaji Tajudeen Quadri disclosed that there were about 3,900 CDAs and 57 Community Development Committees, CDCs in the state, saying that the governor had been so passionate about impacting on grassroots dwellers in the state.

According to him, assisting the communities to execute a minimum of four self-help projects would be beneficiary to the people at the grassroots.

“The governor said he wants to run an inclusive government and these are projects that affect the lives of the people and are beneficiaries to the CDAs,” he said.

However, all the CDAs executives who spoke at the event attended by thousands of CDA members praised Ambode for the gesture, saying that they had endorsed him for a second term in office due to his excellence performance in infrastructural execution.