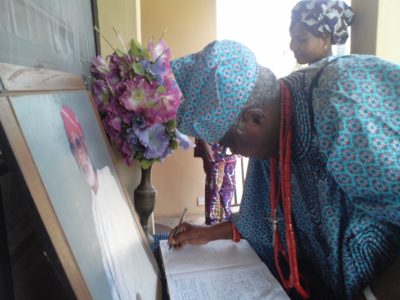 Sympathisers have continued to visit the Basorun, Ibadan, Oyo State residence of late Professor Akinwumi Isola who died last Saturday, to sympathise with the family.

In the condolence register, all the sympathisers described the deceased as a honest, worthy son and ambassador of Yorubaland, and Nigeria in general.

According to a governorship aspirant in the forthcoming election, Niyi Akintola, SAN, “Daddy, you lived well and died well. You lived up to your appellation, “The Honest Man”. You were very honest indeed. You were contented with life and what life devolved on you. You were never materialistic. You built a formidable name for yourself. You were an icon in every sense of the word”.

Former Commissioner for Lands, Physical Planning and Urban Development Planning in the State of Osun and the only son of late Chief Bola Ige, the former Governor of the old Oyo State, Architect Muyiwa Ige said, “To God be all the glory. Yorubaland has lost yet again, another great one. Professor Akinwumi Isola will be sorely missed”.

While Ropo Sekoni said, “Honest Man, this is humanity at work.” Professor Muyiwa Sanda said, “Papa you lived a fulfilled life. You were great in life and death”.

Also in attendance were some members of the Association of Nigeria Theatre Arts Practitioners, ANTP, including Chief Lere Paimo, Chief Jimoh Aliu and Chief Yahaya Adetunji who said, “Akinwumi Isola is a Nigerian patriot, writer par excellence, and an artistic director of note. A well read, known and an astute actor of the millennium has gone. Professor Akinwumi Isola made a mark that would be remembered for long as a humble and straightforward man”.

In just a statement, Jumoke Anifowose, nee Ajasin said, “Daddy, you are my father’s angel. I am proud of you” and Reverend E. I. Ariyo simply said, “An honest friend is gone”.

Meanwhile, PMNEWS gathered that the family is considering holding the burial of the Yoruba icon in April this year.