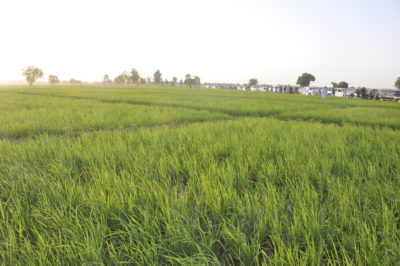 Former Head of Civil Service of Kebbi, Buhari Jega said he made a fortune from rice farming under the Federal Government Anchor Borrowing Programme.

Jega disclotold the News Agency of Nigeria (NAN) after the Minister of Information and Culture, Alhaji Lai Mohammed and a team of journalists were conducted round a 20 km stretch rice farms in Jega near Birnin Kebbi that he ventured into rice farming after leaving office

NAN reports that the Minister who led the journalists to Kebbi for on hand assessment of the agricultural revolution in the state was guided by the state Commissioner for Agriculture, Alhaji Mohammed Dandiga.

The retired civil servant said he ventured into rice farming after leaving office and he took advantage of the supports by the federal and state governments through the Anchor Borrowing Programme.

NAN reports that the Central Bank of Nigeria’s Anchor Borrowers’ Programme was launched by President Muhammadu Buhari on Nov. 17, 2015 in Birnin Kebbi, Kebbi.

Under the programme, the CBN is setting aside 40 billion Naira out the 220 billion Naira Micro, Small and Medium Enterprise Development Fund to be given to farmers at single digit interest rate of maximum nine per cent per annum.

It is designed to provide funds, seedlings, fertiliser, agro equipment and extension services to registered farmers.

Jega said he is a proud owner of three rice farms within his community each measuring 13 hectares, 10 hectares and seven hectares .

Jega advised workers to consider farming as their post retirement venture and start planning for it early while in active service.

Speaking on the challenges of rice farmers in Kebbi, Jega identified high cost of petrol to power generator set used for irrigation.

He said farmers in the area, largely, dug well within their farms from which they pump out underground water with generator set for irrigation.

Jega therefore appealed to the government to provide fuel dump near the farms area to sell petrol to the farmers at subsidised rate.

Alternatively, he said the government should help to provide solar panel irrigation pumps for them.

The Minister of Information and Culture, Mohammed assured the farmers that the government would address their challenges and continue to support their efforts.

He gave the assurance during the guided tour with newsmen of the 20 km rice farm within which the Buhari Jega’s farms are located.

The minister who addressed the farmers and listened to their complaints at several points said the government is committed to its self sufficiency policy in rice and other staples.

He said the local rice is safer and more nutritional than the imported brands and Nigerians must be encouraged to embrace it.

NAN reports that he minister also inspected a mini rice mill in the Jega community with 200 tonnes capacity (400 bags) per day.

For his part, Dandiga, the state commissioner for agriculture, said there were 200,000 rice farmers in 16 local government areas of the state.

He said some of the farmer used blended fertiliser with manure and cultivate rice thrice a year.