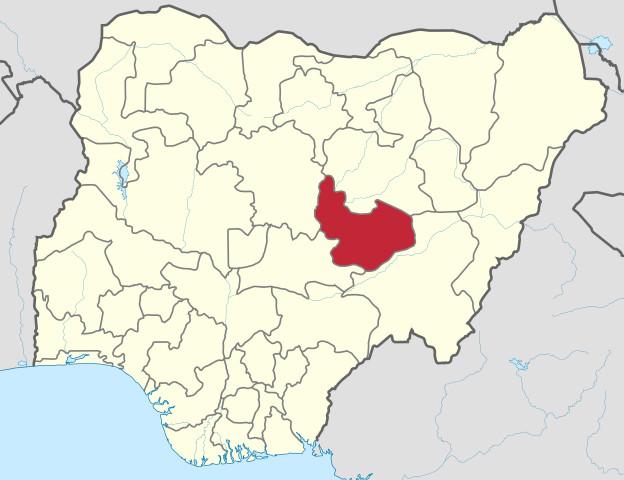 Location of Plateau State in Nigeria. By Derivative work: User:Profoss - Original work:Uwe Dedering - This vector image was created with Inkscape.This file was uploaded with Commonist.This vector image includes elements that have been taken or adapted from this:  Nigeria location map.svg (by Uwe Dedering)., CC BY-SA 3.0, https://commons.wikimedia.org/w/index.php?curid=17436052

Mr Danjuma Wabas, Councillor representing Daffo District in the Bokkos Local Government Council, who confirmed the figure said that the deceased were given a mass burial.

He said that those killed included five women, four men and an infant.

A correspondent, who visited some of the affected villages, reports that many of them were burnt down while the fear-stricken villagers had fled to either Daffo, Bokkos or other areas of the state.

Among the houses razed down was that of a former Deputy Governor of Plateau.

Some of the villagers, who spoke, said that the attackers wore “black uniform” and had sophisticated guns.

“The attackers wore black uniforms and had something that looked liked a scarf on their heads,” one Malo Mafulul, disclosed at Ganda village.

Wabas, who confirmed Mafulul’s claims, described the situation as “scary”, saying that more people were still unaccounted for.

“As we speak, more people are missing while some of the injured persons taken to the hospitals have died.

“Among those who died in the hospital is one Mrs. Naomi Zakaria, who was shot in the stomach.

“We rushed her to the Plateau Specialist Hospital, Jos but she died shortly after we arrived there,” he said.

Wabas, who said that the attackers were moving from one village to the other, disclosed that they destroyed crops and burnt down unharvested crops.

The councillor said that the entire Daffo District had been thrown into mourning, and urged security security personnel to help those taking refuge in places of worship and other areas in Daffo town.

Major Umar Adams, spokesman of Operation Save Haven (OPSH), the security outfit in charge of security on the Plateau, confirmed the attacks.

“Yes, we are aware of the attacks, but we are yet to ascertain the number of casualties.

“When the report came to my officers over there, the first four women that were shot were rushed to the hospital for medical attention. As at that time, only one infant, who is less than one year old, was confirmed dead.

“The situation only got worse when some youths mobilized themselves to confront the attackers,” he said.

He, however, said that calm had returned to the affected areas, adding that five persons had been arrested in connection with the attacks.

Adams said that most of the Internally Displaced Persons (IDPs), were taking refuge in some worship centres in Bokkos town, while some of those injured were being treated at Bokkos Cottage Hospital and Plateau Specialist Hospital in Jos.

The STF spokesman urged the people to exercise restrain and allow the security agents to deal with the situation.

“The youths should exercise restrain and support the security agencies to restore sanity to Daffo District and Bokkos Local Government,” he said.

“The attacks are getting too many. It is a very difficult situation for the entire Bokkos Local Government,” he said.

According to him, many people have been killed with even more injured, while thousands had been rendered homeless.

He called on the federal and Plateau governments to come to the aid of the victims, saying that most of them were women and children whose situation had gone beyond the capacity of the local government.

Angyol, however, commended the security agencies for their quick response which restored calm to the affected areas.