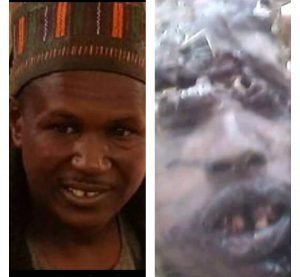 Zamfara State’s most wanted bandit Buharin Daji has been killed by colleagues in the bushes of Dansadau.

Zamfara Deputy Governor, Alhaji Ibrahim Wakkala, confirmed this on Friday while displaying the dead body of the “most notorious armed bandit” on security wanted list in the state.

Popularly known as Buharin Daji, the bandit was said to have been behind the killing of hundreds of people in the state.

The body was brought to Government House, Gasau, under tight security from the bushes of Dansadau, about 200 kilometers from the state capital where he was reported to have been killed .

“I am here to confirm to you that this notorious bandit, Buharin Daji, has finally met his waterloo.

“He was killed by some of the repentant bandits who have since renounced their criminal ways and are helping security agents in dislodging those that have refused to surrender. ”

Wakkala said that the governor had directed that the remains should be deposited at the mortuary until he returned from his trip to give further details on what happened.

He commended the people of the state for their prayers which culminated into what happened and urged them to continue with the prayers for the attainment of lasting peace in the state and the country.

He commended the Federal Government for deploying more security agents to the state and all those who contributed to the successes recorded.