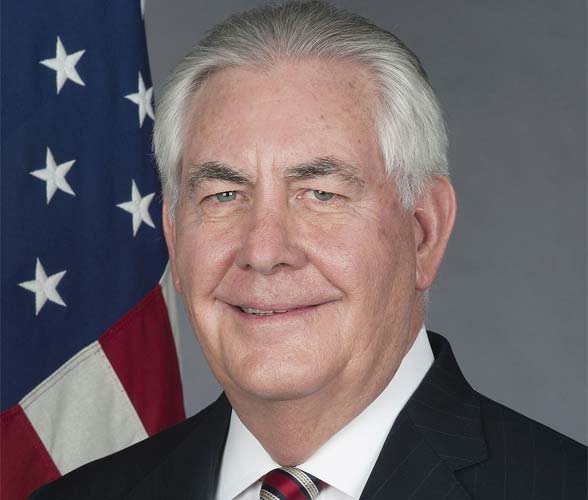 U. S. Secretary of State Rex Tillerson has cut short his first trip to Africa to return to Washington about one day ahead of schedule to deal with urgent work there.

Tillerson’s travel plans have changed so that he can return to Washington early on Tuesday morning instead of late that night, spokesman for the top diplomat told reporters travelling with him.

Tillerson, will arrive in Abuja on Monday for his first official visit to Nigeria.

A Press Advisory from the U.S. Embassy said Tillerson would hold talks with President Muhammadu Buhari on Tuesday.

“When he arrives, Tillerson will become the highest ranking official in the Trump administration to visit Nigeria.

”The secretary is expected to hold a press conference at the Presidential Villa on Tuesday by 11.45am.

“Tillerson is expected to be joined in the press conference by the Minister of Foreign Affairs Geoffrey Onyeama,” the embassy stated.

Tillerson has been on a week-long tour of Africa.

He has visited the Horn of Africa just days after he announced a new $533m aid package for Africa out of which $128m was earmarked for Nigeria and countries of the Lake Chad region.

When Tillerson meets Buhari, both men are expected to discuss counter-terrorism efforts and humanitarian issues in Nigeria’s North-East and the Lake Chad basin.

He is also expected to discuss how to advance peace and security, promote good governance, and spur mutually beneficial trade and investment with the President

During his trip, he is expected also to meet with the U.S. Embassy personnel and participate in events related to U.S. government-supported activities.