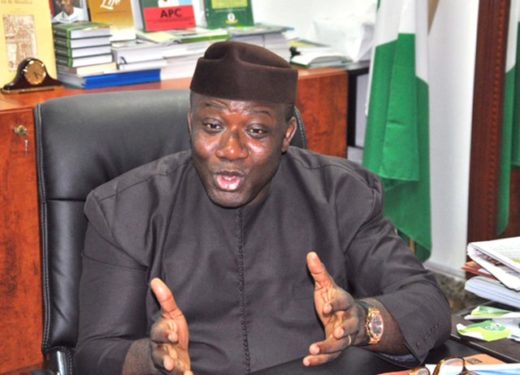 Dr Kayode Fayemi, the Minister of Mines and Steel Development, has charged newly inaugurated board members of Agencies and Parastatals under the ministry to address the challenges undermining the growth of the sector.

Fayemi gave the charge while inaugurating 51 board members, including four chairmen appointed to head four agencies under the ministry on Monday in Abuja.

He charged the board members of the Nigerian Geological Survey Agency (NGSA) established by NGSA Act 2006 to address lack of Geosciences data, a problem that had undermined the growth of the sector.

The minister said the National Steel Raw Materials Exploration Agency (NSRMEA), established to address the basic mineral raw materials needs of the Steel industries in Nigeria should be reawakened by the new board members.

He also urged the board members of the National Metallurgical Development Centre (NMDC) to address the issues of mineral beneficiation and research on minerals.

Fayemi similarly charged the board chairman and members of the Council of Nigerian Mining Engineers and Geoscientists (COMEG) to regulate professional practice within the sector.

The Chairmen of the Boards of the agencies are, Mr Emma Bassey who heads the Nigerian Geological Survey Agency and Dr. Yomi Finnih for the National Steel Raw Materials Exploration Agency.

Others include Mr Sebastine Ibezim, who heads the National Metallurgical Development Agency and Mr Godspower Okpoi for the Council of Nigerian Mining Engineers and Geoscientists (COMEG).

Fayemi said the roles of the new boards also included a provision of effective oversight and strategic advisory to the respective management teams of the four agencies.

He said the sector remained crucial due to its recognition as one of the frontiers of the Federal Government’s drive recently launched to achieve the Economic Recovery and Growth Plan (ERGP) 2017-2020.

“The Minerals and Metals sector was duly recognised as one of those to drive Nigeria’s recovery as the strategic document projected to grow sectoral contribution to the Gross Domestic Product (GDP) from N103 billion (2015) to N141 billion in 2020,’’ he said.

He also said the ministry had been selected as one of the critical players in the ERGP Focus Labs, which would be launched by Mr President this week.

Fayemi said other targets for the sector included the facilitation of Coal to Power Plants to contribute to the energy mix toward bridging the energy deficit in the country.

According to Fayemi, the inauguration of the boards coincided with the commencement of the Roadmap, as well as the implementation of the World Bank-supported Mineral Diversification Project.

“We, therefore, count on the patriotic service of the board members to play their own part as crucial enablers in the industry toward advancing a common vision for the revitalisation of the sector.’’

Alhaji Abubakar Bwari, the Minister of State, said the appointments came at a crucial time that the boards could exhibit their talents and commitment to address challenges facing the sector.

Bwari said the mining roadmap launched in 2017 was meant to put Nigeria back on the world mining map, adding that this could be achieved through their efforts and commitment.

Earlier, Dr Abdulkadir Mu’azu, the Permanent Secretary of the ministry, said the present administration was pursuing three cardinal policy thrust: the fight against corruption, securing the nation and revamping the economy.

According to him, if the sector is properly rejuvenated, it has the potential to drive industrialisation, create wealth and provide employment for millions of people.

He reminded members that the boards were part-time constituted to provide direction for government policy to achieve the mandates of the agencies as provided in their respective acts.

Fayemi noted that the day-to-day running of the agencies rested with the respective management teams of the agency.

Mr Emma Bassey, the Chairman of the Board of the Nigerian Geological Survey Agency (NGSA), who responded on behalf of other members, assured that they would do their best to find solutions to the challenges facing the sector.

Bassey said the new board members would deliver their duties, work diligently with members of staff of the ministry and provide proper policies to move the sector forward.