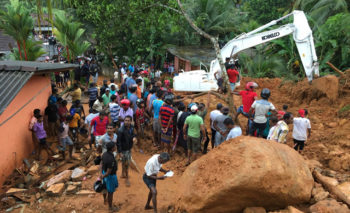 Six people died in a landslide that occurred at Illela-Kalmalo village of Illela Local Government Area of Sokoto State.

The incident occurred while the victims were excavating sand as part of communal effort to build a for a friend planning to get married.

A witness, Malam Hamza Illela, said that one person escaped unhurt when the site caved in on the victims.

Names of the deceased were given as Bashar Dalhatu, Bashar Maciji, Bashar Buhari, Isah Amadu, Abdullahi Salihu and Bilyaminu Jadi.

Sources in the village said the deceased had been buried according to Islamic rites.

‘‘It is part of our tradition that whoever wants to do first marriage, his friends will gather, excavate soil for him to build his house, beside other assistance.

‘‘It is to reduce the burden on him and enhance existing solidarity in the community.

‘‘Unfortunately, while they were excavating the soil, the place collapsed on them; we later recovered their bodies and gave them befitting burial in accordance with Islamic rites,’’ one of the villagers who preferred anonymity said.

The source said although the people were in a state of shock, they were grateful to God because they died as martyrs.

He said he was among the dignitaries that attended their burial rites, adding that he also donated bags of rice to their families.

The council chairman prayed Allah to forgive their shortcomings and grant their families the fortitude to bear the loss.