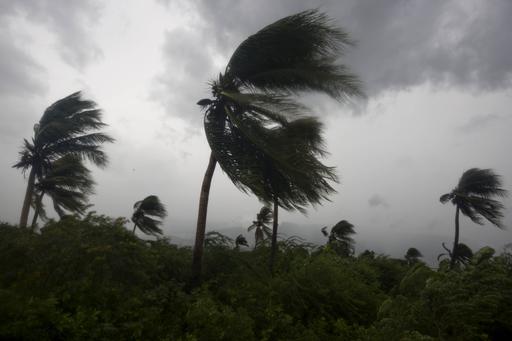 FILE PHOTO: Wind blows coconut trees during the passage of Hurricane Matthew in Port-au-Prince, Haiti, Tuesday, Oct. 4, 2016. Hurricane Matthew roared into the southwestern coast of Haiti on Tuesday, threatening a largely rural corner of the impoverished country with devastating storm conditions as it headed north toward Cuba and the eastern coast of Florida. (AP Photo/Dieu Nalio Chery)

Its Regional Communication Officer, Mr Asaju Kolawole, told the News Agency of Nigeria (NAN) on Thursday in llorin that the storm also damaged over 20 electricity poles.

The rainstorm also damaged several buildings, including places of worship in various parts of the state capital.

“The rainstorm crashed the network of Baaboko which supplies power to larger part of llorin,” Kolawole said.

The Communication Manager, who did not specify when electricity would be restored, said that the company’s engineers were working day and night to restore power supply to the affected areas.

Kolawole, while describing the incident as unfortunate, appealed to residents of llorin to exercise patience.