3 killed as vehicle ploughed into crowd in Germany 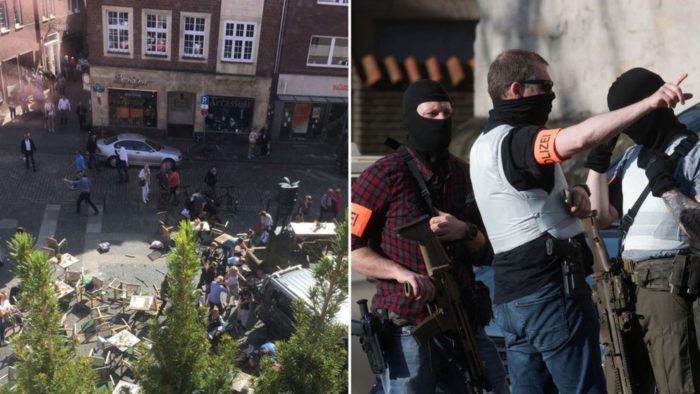 Scene of the incident in Munster. Credit: Sky Sports/Pauli Feger

At least three people died Saturday when a vehicle ploughed into busy cafe and restaurant terraces in the German city of Muenster before the driver shot himself dead.

Images on social media showed smashed and upturned tables and chairs strewn across the pavement outside an eateries in the centre of the picturesque medieval city.

At least 20 people were injured, six of them seriously, according to police, while media reports said the driver had been behind the wheel of a delivery van.

A police spokeswoman in the western city, Vanessa Arlt, told AFP that the driver of the vehicle “shot himself”.

“The perpetrator drove into several cafe and restaurant terraces in a major square in the centre of Muenster,” Arlt added.

Police spokesman, Andreas Bode, said it was “too soon” to call the incident a deliberate attack.

According to the online edition of the Spiegel magazine, German authorities were “assuming” the incident was an attack, though there was no immediate official confirmation of a motive.

“Our thoughts are with the victims and their loved ones.”

Armed police were deployed and officers urged residents to avoid the city centre to allow investigators to get to work.

Germany had long warned of the threat of more violence ahead after several attacks claimed by the Islamic State jihadist group, the bloodiest of which was a truck rampage through a Berlin Christmas market in December 2016 that left 12 people dead.

The attacker, Tunisian asylum seeker Anis Amri, hijacked a truck and murdered its Polish driver before killing another 11 people and wounding dozens more by ploughing the heavy vehicle through the festive market in central Berlin.

He was shot dead by Italian police in Milan four days later while on the run.

Germany has since been targeted again in attacks with radical Islamist motives.

In July 2017, a 26-year-old Palestinian asylum seeker wielding a knife stormed into a supermarket in the northern port city of Hamburg, killing one person and wounding six others before being detained by passers-by.

And at the end of October, German police arrested a 19-year-old Syrian identified only as Yamen A. suspected of planning a “serious bomb attack” using powerful explosives.

IS also claimed responsibility for a number of attacks in 2016, including the murder of a teenager in Hamburg, a suicide bombing in the southern city of Ansbach that wounded 15, and an axe attack on a train in Bavaria that left five injured.

Germany remains a target for jihadist groups, in particular because of its involvement in the coalition fighting IS in Iraq and Syria, and its deployment in Afghanistan since 2001.

German troops in the anti-IS coalition do not participate in combat operations but support it through reconnaissance, refuelling and training.

Germany’s security services estimate there are around 10,000 Islamic radicals in Germany, some 1,600 of whom are suspected of being capable of using violence.

Chancellor Angela Merkel has allowed in more than one million asylum seekers in the past two years — a decision that has driven the rise of the far-right Alternative for Germany (AfD) party, which charges that the influx spells a heightened security risk.

IS also claimed several similar attacks in Europe, including a rampage along Barcelona’s Las Ramblas boulevard in August 2017 that killed 14 and left more than 100 injured.

The deadliest such incident in recent years was in the French resort city of Nice in 2016, where a man rammed a truck into a crowd on France’s national July 14 holiday, killing 86 people, AFP reports.