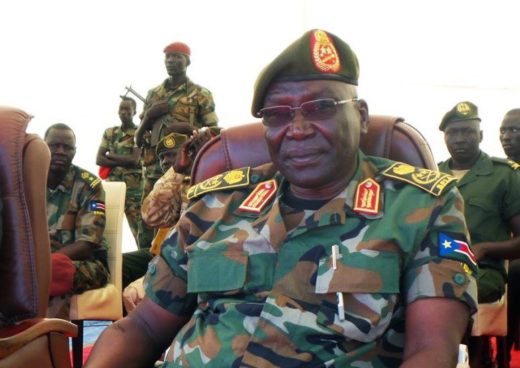 South Sudan’s former military chief said he has formed an organisation to challenge President Salva Kiir, accusing him of looting the country’s resources and turning it into a failed state.

Paul Malong was sacked in 2017 amid resignations by some generals who alleged abuses by the military and tribal bias in the army ranks.

Since November 2017 he has been in exile in Kenya where he was allowed to travel after months of tension between him and his guards and Kiir’s government.

Malong said in a statement that his new organisation called South Sudan-United Front was “a struggle to … arrest the carnage” and steer the nation back to democracy.

South Sudan plunged into a civil war in 2013 after a political disagreement between Kiir and his former deputy, Riek Machar, degenerated into a military confrontation.

A 2015 agreement aimed at ending the conflict failed after hostilities again broke out between the two rivals.

The war has killed tens of thousands of people and uprooted about a quarter of the country’s population of 12 million.

In the statement, Malong said Kiir “concentrated all his efforts with the help of a small clique around him to quite literally loot the coffers of our great nation to total bankruptcy”.

Malong’s wife Lacy Ayak confirmed to Reuters that her husband had written the statement, which took the form of an open letter to the people of South Sudan.

It was not immediately clear whether Malong’s organisation would join forces with rebels to fight Kiir militarily or would try to challenge him politically.

However, Malong said he was ready to participate in planned talks to end the conflict in Ethiopia’s capital Addis Ababa later in the month.

Although the opposition was initially solidly behind Machar, in recent years anti-Kiir forces have splintered into factions which has partly complicated efforts to end the war.

Government spokesman Michael Makuei told Reuters that Malong was angry because of his sacking, adding that he had been part of the government that he is now criticising, meaning he shared responsibility for what he thinks went wrong.

“If he wants to fight, let him fight and we will meet him in the field,” Makuei said.