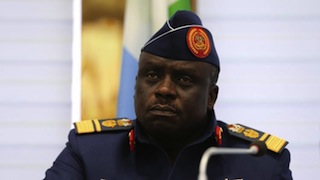 A prosecution witness, Mr Tosin Owobo, on Wednesday, told a Federal High Court, Lagos, that the statement made by a former Chief of Air Staff, Air Marshal Adesola Amosu at the Economic and Financial Crimes Commission (EFCC), was taken in the presence of his lawyer.

Owobo, an operative with the commission, was testifying at the resumed trial of Amosu, who is standing trial over allegations of fraud.

They are under prosecution by the Economic and Financial Crimes Commission (EFCC).

When trial resumed on Wednesday, Owobo, who had previously been sworn on oath at the last adjourned date, continued his evidence before the court.

The prosecutor, Mr Rotimi Oyedepo asked the witness if any other person , apart from officers of the Agency, were present when the statement of the first accused was taken.

In response, the witness told the court that the statement of the accused was taken in the presence of his lawyers.

Owobo told the court that lawyers to the second and third accused were also present when their statements were volunteered at the commission.

He said that the second accused was not arrested, and he came to the commission with some documents and his lawyers.

Oyedepo then told the court that he was done with examination of the witness.

Meanwhile, Mr Bolaji Ayorinde (SAN), counsel for the first and eleventh accused, informed the court that the last adjournment was for the prosecution to conclude its examination and not for cross-examination.

He further told the court that they had applied for a certified true copy (CTC) of the court proceedings to enable them cross-examine the witness but had not been able to get it.

Ayorinde applied for adjournment to enable the defence to obtain the said CTC, and proceed with cross-examination of the witness.

Other defence counsel agreed with his submissions.

Oyedepo, however, informed the court that during examination of the second witness, lawyers in the defence team were taking down notes of the proceedings.

He said that an application for adjournment predicated on record of proceedings was not brought in good faith.

In his remark, Justice Mohammed Idris held that in the interest of justice, the case would be adjourned until May 2, 14 and 15 for cross-examination of the witness.

The accused persons were arraigned before Justice Idris on June 26, 2016, and had pleaded not guilty to the charges.

They were charged with conspiracy, stealing and money laundering.

The  offences contravened the provisions of Section 18(a) of the Money Laundering (Prohibition) (Amendment) Act, 2012.

Idris had granted them bail in the sum of N500 million each, with two sureties each in like sum.