Belgian companies under investgation for chemical exports to Syria 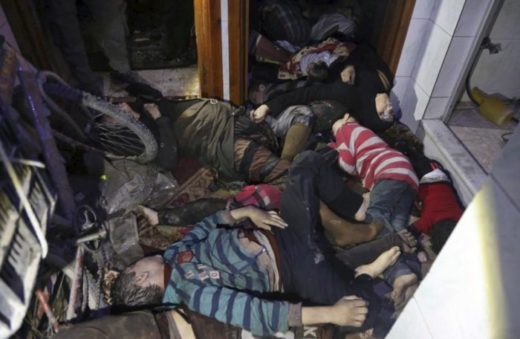 This image released early Sunday, April 8, 2018 by the Syrian Civil Defense White Helmets, shows victims of an alleged chemical weapons attack collapsed on the floor of a building in the rebel-held town of Douma, near Damascus, Syria. Syrian rescuers and medics say a poison gas attack on Douma has killed at least 40 people. The Syrian government denied the allegations, which could not be independently verified. The alleged attack in the town of Douma occurred Saturday night amid a resumed offensive by Syrian government forces after the collapse of a truce. (Syrian Civil Defense White Helmets via AP)

Belgium has opened an investigation against three companies for allegedly illegally exporting a chemical to Syria that could be used to produce the nerve agent sarin, Belgian Foreign Minister, Didier Reynders, said on Thursday.

Reynders spoke to local broadcasters Bel RTL and RTBF, confirming a report by the magazine Knack and the organisation Syrian Archive showing that in spite strict EU sanctions against Syria since 2013, three Belgian companies exported 96 tonnes of Isopropanol to the country between 2014 and 2016.

Isopropanol, which is a chemical freely available in Europe and often used as a solvent, is considered “dual use” because it can be used to manufacture sarin, which has been used in the Syrian conflict.