Duke and Duchess of Cambridge presents 3rd child to the world 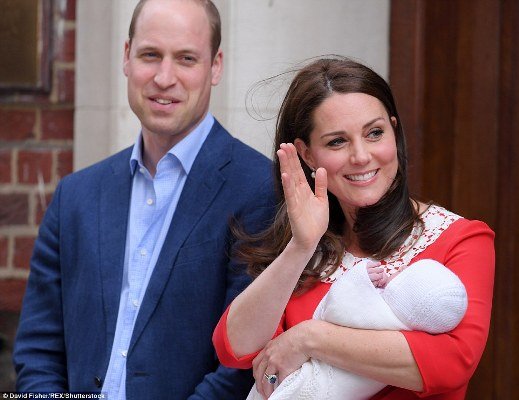 The Duchess of Cambridge and Prince William emerged from the Lindo Wing with their new son on Monday in London.

Kate, wife of Britain’s Prince William, will leave hospital in London on Monday after giving birth to a healthy baby boy.

William was present for the birth at St Mary’s Hospital in west London where their other two children, George and Charlotte, were also born.

William later brought the elder children to meet their new brother as well-wishers cheered outside the hospital. They will later travel home to Kensington Palace.

Queen Elizabeth, Prince Charles, the baby’s grandfather, and other members of the royal family and Kate’s family have been informed and “are delighted with the news”, it added.

When William brought his children to see their brother, Princess Charlotte, 2, turned and waved at hundreds of assembled journalists and well-wishers. George, 4, did not wave.

The name of the new royal will be announced in due course, the Palace said. Bookmakers have made Albert, Arthur, Jack and Fred the favorite names for a boy.

The baby is the queen’s sixth great-grandchild and is behind his grandfather and heir Prince Charles, father William, and siblings George and Charlotte in line to the throne.

A 2013 change to the law means that for the first time in British history, a new prince will not supplant his older sister in the order of succession. Previously younger males would take precedence over older female siblings.

The official announcement of the birth was made by placing a notice on an easel in the forecourt of the queen’s London home, Buckingham Palace, a tradition that has been in place since it became the sovereign’s official residence in 1837.

“My warmest congratulations to the Duke and Duchess of Cambridge on the birth of their baby boy,” Prime Minister Theresa May said. “I wish them great happiness for the future.”
ROYAL PRINCE

William and Kate met as students at St Andrews University in Scotland. They wed in a pageant-packed ceremony at Westminster Abbey in April 2011 and are treated as global celebrities.

The couple now live at Kensington Palace and last year William gave up his day job as an air ambulance pilot to concentrate full time on royal duties on behalf of his grandmother, having faced some criticism from British newspapers who dubbed him “workshy Wills”.