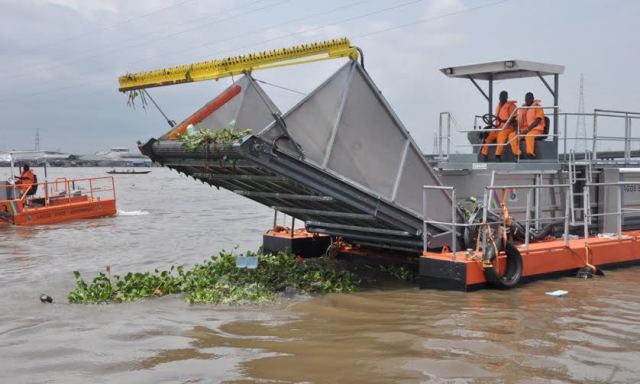 One of the Water Hyacinth Removal Machines

Compt. Sarkin Kebbi, the Comptroller of Western Marine Command of the Nigeria Customs Service (NCS) in Lagos, said smuggling activities had reduced on the nation’s waterways.

Kebbi told the News Agency of Nigeria (NAN) on Wednesday in Lagos that this was because the command adopted fresh strategies to achieve the feat.

The comptroller said the command adopted a tripartite arrangement that involved officers’ motivation, partnership with the coastal communities and liaising with sister agencies to bust smuggle syndicates.

“The cooperation led to marked improvement in the anti smuggling activities, leading to seven seizures of goods with a Duty Paid Value (DPV) of over N26.9 million in the first quarter of this year.

“The command does not negotiate with smugglers as officers go all out to combat them in the creeks and waterways.

According to him, the command has been successful in anti smuggling due to the Controller-General’s wealth of experience in enforcement activities.

He said he boosted the morale of the officers and men by creating different patrol teams code-named ‘Operation Total Blockage’ and the ‘CAC Headquarters Surveillance Team’ that patrolled the waterways on a 24 hours basis.

The command’s operational area covers the whole of the South west and extends to the North West region of the country.