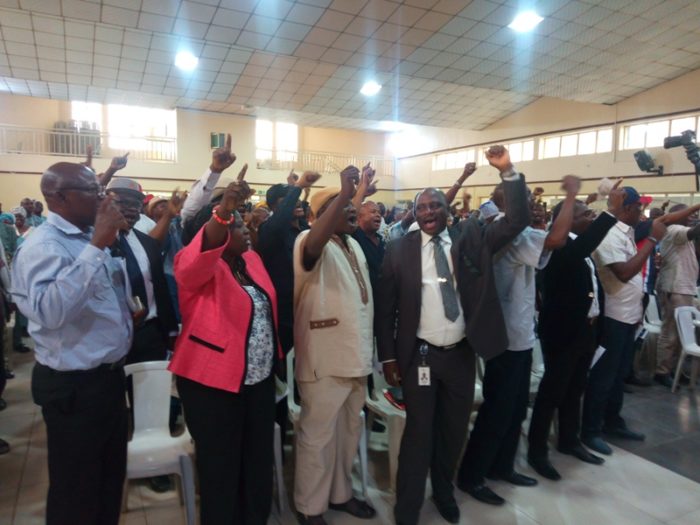 The Organised Labour on Thursday in Lagos demanded a new minimum wage of N66,500 for all workers in the country.

Presenting the memoranda of the Nigerian Labour Congress, NLC, and the Trade Union Congress, TUC at the event, Agnes Sessi, Chairman, Political Committee, NLC, said the current wage structure could not sustain any worker at this critical period in the nation’s history.

According to her, the two labour centreshad agreed that there was the urgent need to review upward the minimum wage to meet the current economic realities, lift a pool of working class out of the poverty trap and to conform with the International Labour Organisation, ILO standards on minimum wage fixing to meet the needs of all workers and their families.

She submitted that based on the current realities, the two labour centres “demand for a new monthly national minimum wage of N66,500, which is approximately the average of the implied minimum wages derived under three approaches.”

The approaches are: Comparative Analysis based on Minimum Wages in some African Countries; An Estimate of the monthly Minimum cost of providing basic needs to a family of six and two dependants and Analysis based on rising cost of living over time.

Sessi added that the two labour centres wanted the minimum wage act to be amended to provide its review every five years or whenever there was a general wage review, adding that the best international practice recommended that the minimum wage law should apply to all workers and not to establishments with 50 workers and above, as contained in the present Act as amended in 2011.

She said the review of the minimum wage would boost aggregate demand which would further provide a boost to the economy coming out of recession, adding that an enhanced minimum wage financed by increased taxation on the rich and luxury goods would promote equity and growth in the economy.

Also speaking, the Association of Senior Civil Servants of Nigeria, Lagos branch, aligned with the NLC and TUC in demanding for N66,500 new minimum wage.

Spokesperson of the association, Comrade Akeem Kazeem emphasized that the need for urgent upward review of the national minimum wage was long overdue because the current pay structure in the country had become unrealistic and inadequate, such that workers could no longer meet their basic needs, a scenario that is impacting negatively on their morale.

“The sum of N18,000 which is currently being paid as the minimum salary in the civil service is grossly inadequate. An officer at that level will, however, require about N66,500 a month to survive. We are in total support of the demand for the sum of N66,500 for a salary of GL. 01 Step 1 officer as requested by the organized labout,” he said.

Speaking, Lagos State Governor, Akinwunmi Ambode said there was a consensus of opinion on the need for workers to be reasonably remunerated and compensated in line with current economic realities, saying that this was why a provision was made in the law for periodic review of the national minimum wage as every worker deserved a wage that guaranteed decent standard of living.

“The issue, however, which I believe is more peculiar to the public sector, is striking a balance between what goes into recurrent expenditure of which salaries and allowances is a major component and the ability of government to fulfill its obligations to the larger society.

“In this instance, the revenue profile of each state becomes a major determinant of what can reasonably be afforded in terms of wages, without jeopardizing the ability of the government to fund social services that are critical to the well-being of the entire citizens,” he said.

Ambode, who was represented by the Head of Service, Folasade Adesoye stated that at N18,000 minimum wage, the state’s monthly wage bill was in excess of N10 billion for a workforce of 103,000, asides retirement benefits obligations.

He said while it was true that Lagos State generated the highest Internally Generated Revenue, IGR, it must also be recognized that due to the growing population, “we also shoulder the highest responsibility in terms of the resources that must be expended on social and physical infrastructure renewal and development.”

Ambode charged stakeholders to be open-minded and flexible in their demands in the overall interest of everyone.

Earlier, the Chairman, Tripartite Committee on the National Minimum Wage and Governor of Kebbi State, Atiku Bagudu, who was represented by his deputy governor, Col. Samaila Dabai, said the national minimum wage was first fixed in 1981 and subsequently reviewed in 1991, 2000 and 2011.

“It therefore means that hitherto, there appeared to be an unwritten cycle of 10 years between reviews,” he said, adding that the tripartite committee set up by the federal government comprised governments at the federal and state levels, the organized labour and the organized private sector in accordance with the Conventions of the International labour Organisation.

“This onerous task cannot be adequately carried out without the wide consultations, which this public hearing provides.”