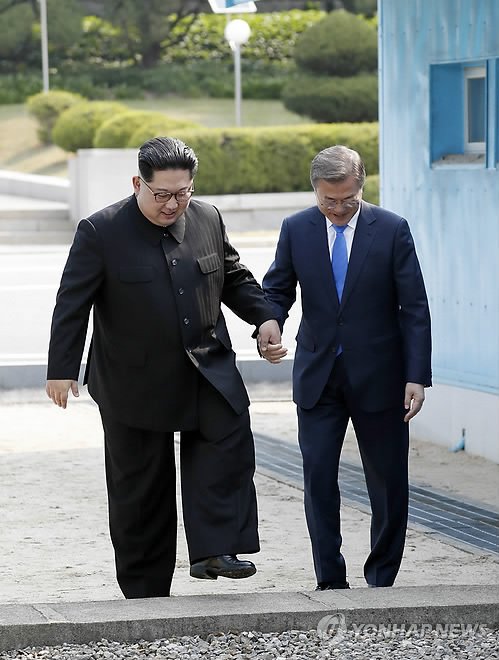 Kim Jong-Un and Moon Jae-in: agree to end Korean war and also complete denuclearisation
South and North Korea agreed Friday that they will work together to realize a “complete” denuclearisation of the Korean Peninsula, as they also resolved to formally end Korean War at historic summit.

The agreement, according to Yonhap News, was part of a joint declaration issued after South Korean President Moon Jae-in and North Korean leader Kim Jong-un held a historic summit earlier in the day at the truce village of Panmunjom.

“South and North Korea affirmed their shared objective of achieving a nuclear-free Korean Peninsula through complete denuclearisation,” said the declaration signed by the leaders of the two Koreas.

They shared the view that the recent steps that the North has taken are “very meaningful” and “important” for denuclearisation efforts and agreed to do their respective part on that matter, the declaration said.

The two Koreas also agreed to induce support and cooperation from the international community for the sake of denuclearisation of the Korean Peninsula.

The agreement on the nuclear issue comes as North Korea and the United States are expected to hold an unprecedented summit either in May or early June. Denuclearisation will likely top the agenda during the talks between Kim and U.S. President Donald Trump.

The U.S. and South Korea have demanded the North give up its nuclear weapons in a complete, verifiable and irreversible manner. The North recently suggested “phased and synchronised” measures for denuclearisation.

The North has conducted six nuclear tests since 2006, the last and most powerful coming in September last year. In November, the North declared the completion of its nuclear armament.

The two Koreas also agreed to actively push for 3-way or 4-way talks also involving the U.S. and China.

And President Moon will also visit North Korea this year.