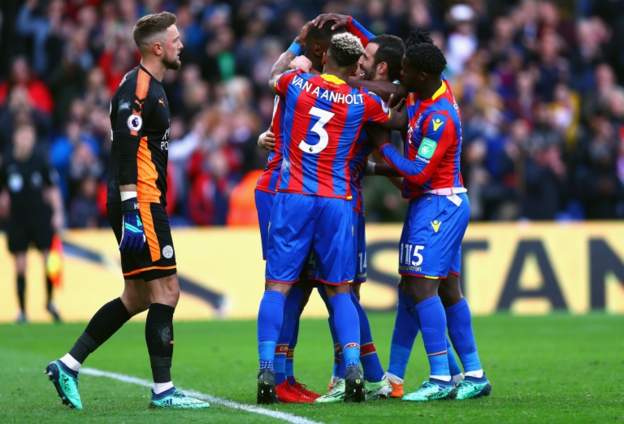 Crystal Palace all but guaranteed their Premier League safety after a dominant display against 10-man Leicester City saw them winning 5-0.

Palace looked like they had the match sewn up at half-time after goals from Wilfried Zaha and James McArthur, which both came from fantastic passing moves.

According to BBC, the Foxes’ intensity improved early in the second half, but any hopes of a comeback looked out of sight when Marc Albrighton received a straight red for pulling down an on-rushing Zaha.

They fell apart in defence and it allowed first Ruben Loftus-Cheek and then Patrick van Aanholt to slot past goalkeeper Ben Hamer to make it 4-0.

Christian Benteke, on as a late substitute, compounded Leicester’s misery when he scored from the spot after being fouled by Harry Maguire.

The result moves Roy Hodgson’s side eight points clear of the relegation zone with two games to go, although they have played one more match than four teams below them.

Leicester, who are ninth, look to be finishing the season with a whimper after picking up only four wins in their last 18 league matches.

This latest result and performance puts more pressure on manager Claude Puel, with speculation already mounting around his future.