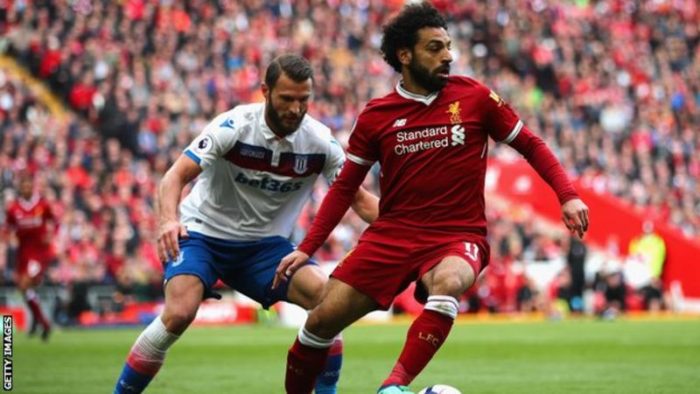 Stoke City earned a surprise, hard-fought draw against Champions League semi-finalists Liverpool at Anfield, but they remain three points adrift of safety with just two games of the season remaining.

Liverpool winger Mohamed Salah missed the chance to break the record for most goals in a 38-game Premier League season when he clipped wide after being sent clear on goal after five minutes, BBC reports.

That let-off focused the visitors, who frustrated a Liverpool side lacking the attacking edge that saw them beat Roma 5-2 in the Champions League semi-final first leg on Tuesday.

Liverpool had a penalty appeal for handball against Erik Pieters turned down late on before Ryan Shawcross could have won it for Stoke but poked narrowly wide.

Paul Lambert’s side are now winless in 12 league games and remain in the relegation zone, three points behind Swansea, who face Chelsea at 17:30 BST.

Liverpool missed the chance to go second but move four points clear of Tottenham in fourth.