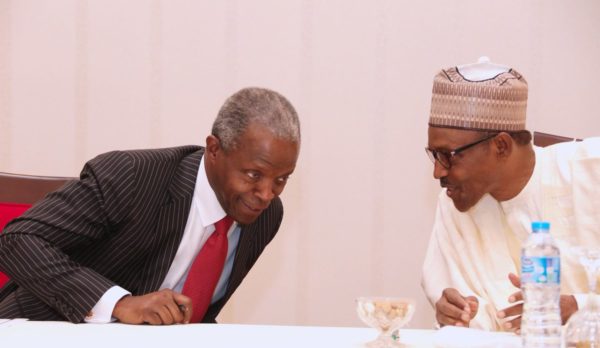 President Buhari and VP osinbajo having a chat during the meeting

Alhaji Lawal Liman, the chairman of the anniversary committee disclosed this at a press conference in Gusau on Wednesday.

Liman, who is the state commissioner of health said about 109 projects comprising hospitals, roads, schools are expected to be inaugurated during the ceremonies

“Even though the date for the president’s visit is not officially announced , but it would be made available to the public later.

“The Vice president is to start with the inauguration of the 61 km Dauran-BirninMagaji-Kaura Namoda road, township roads and semi urban water projects in Bakura and Zurmi local government areas this month.

“While, the schedules of president’s visit would be communicated later.

“We also have water, roads and electrification projects executed by the state governments at the new army brigade, Gusau,” he said

According to him, “other important personalities to visit the state during the ceremonies comprised Minister of Works, Power and Housing, Babatunde Fashola, governors of Sokoto, Ebonyi, Adamawa, Katsina and Kano states.

“Others would be Sultan of Sokoto, former governors of the state, National Assembly members religious and community leaders in the country among others.”