US denounces Burundi political violence ahead of referendum 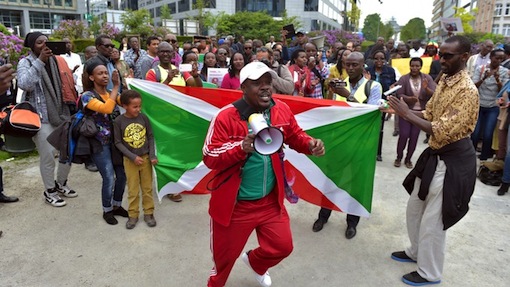 The US State Department has denounced recent political violence in Burundi ahead of the country’s May 17 referendum to amend its constitution and expressed concerns that the vote to extend its president’s term in office could hurt its democratic institutions.

“We denounce the numerous instances of violence, intimidation, and harassment committed against perceived opponents of the referendum,” it said in a statement.

“We call on the government to respect Burundi’s international legal obligations regarding the rights to freedom of expression, peaceful assembly, and association.”

Burundi courts on Monday sentenced an official in the country’s ruling party to three years in jail for pushing to have opponents of the referendum thrown into a lake.

Avvording to the UN, nearly 430,000 people, including opposition politicians, have fled the East African nation of 10.5 million people since President Pierre Nkurunziza won a third term in a 2015 election that led to violent clashes.

NAN reports that according to a presidential decree signed on Sunday March 18 by Nkurunziza, the president set May 17 as the referendum date for a controversial constitutional reform.

The election could allow President Nkurunziza, 54, who has been in office since 2005, to remain in power until 2034.

The decree specifies that the reform will be adopted if the proportion of favorable votes is 50% plus one vote, and that parties or individuals wishing to participate in the campaign for or against this reform must register with the Independent National Electoral Commission ( CENI) between March 23 and April 6.

Official campaign will only begin two weeks before the referendum, and no one is yet allowed to openly defend yes or no.

But the opposition denounces a “double standard, blatant measures”, saying that the ministers and leaders of the ruling party, the National Council for the Defence of Democracy-Forces for the Defense of Democracy (CNDD–FDD), do not hesitate to campaign for yes for several months.

At the same time, dozens of opposition activists were arrested and tried for promoting no.

The opposition also denounced forced enrollment of voters to face, according to it, “the lack of enthusiasm” of the population for this referendum.

The CENI announced on Feb. 20 that more than five million Burundians had registered on the electoral lists for the referendum and the general elections of 2020.